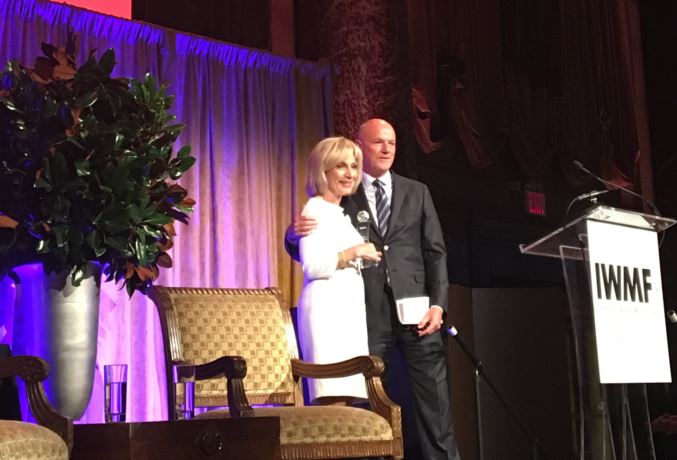 NBC’s Andrea Mitchell received the Lifetime Achievement Award from the International Women’s Media Foundation today as part of their 2017 Courage in Journalism Awards.

MSNBC president Phil Griffin, pictured with Mitchell, introduced NBC’s chief foreign affairs correspondent and MSNBC anchor who remarked on the notable absence of another honoree, Hadeel Al-Yamani of Al Jazeera Arabic, who was denied a visa from Yemen to attend and be honored at the luncheon: “What threat can a woman journalist who braved civil war in Yemen possibly present? If she doesn’t embody U.S. values, I don’t know who does.”

The IWMF has worked for the last 27 years to champion women journalists.

“Only recently has the popular culture begun to recognize the special challenges women encounter in our careers,” Mitchell said. “We overcome those obstacles with the help of a sisterhood,” she said, ending her remarks with: “And by the way, #MeToo,” echoing the hashtag that has been used over the last several days as people share their stories of workplace sexual harassment and abuse.

MSNBC’s Rachel Maddow interviewed Mitchell on stage. “You are the person who taught me how to be a feminist at work,” Maddow said to Mitchell.

Honored to be co-hosting Courage in Journalism Awards again this year. So inspiring! #IWMFCourage #Journohereos pic.twitter.com/q2h3SVFXFx

.@maddow to @mitchellreports "you made me a feminist at work." Congrats on lifetime achievement award to the incomparableAndrea Mitchell! pic.twitter.com/DBNomkE8dM