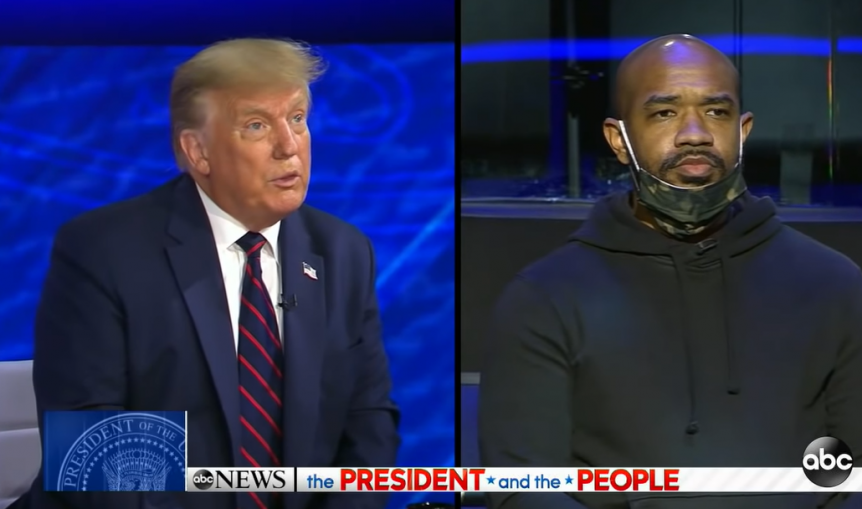 ABC’s 90-minute town hall with President Trump this past Tuesday didn’t earn as many viewers as the network probably had hoped.

ABC News chief anchor George Stephanopoulos moderated the event, which was held at the National Constitution Center in Philadelphia, in accordance with state and local government regulations, as well as guidelines set forward by health officials.

This was the final televised town hall on a broadcast network before the first general election debate, set to take place Sept. 29 (only 12 days away).

Looking at this from an apples-to-apples perspective, the most recent major pre-debate town hall on a broadcast network was the 2016 NBC News Commander-in-Chief Forum, which took place on Sept. 7, 2016, and featured both Donald Trump and Hillary Clinton answering questions about military affairs.

NBC was criticized by many for the format of its forum. Clinton took questions from former military members in the venue, while former Today co-host Matt Lauer, who moderated the forum, was accused of throwing softball questions to Trump.

To be fair to ABC, the network had a lot of things going against it when it came to this town hall. One, NBC’s 2016 Commander-in-Chief Forum was touted as the first joint event of the 2016 general election featuring Trump and Clinton. The ABC special, on the other hand, featured Trump exclusively. Joe Biden was invited to participate in the ABC event, but the network and the campaign couldn’t agree on a date.

Additionally, this Tuesday prime-time forum was going up against the NBA Playoffs, something NBC didn’t have to deal with on the night of its forum.

There was also a streaming audience for the ABC town hall that’s not included in the 4 million number. Streaming is far more prevalent in 2020 than it was in 2016.

On a positive note, the 90-minute special was able to double its low-rated lead-in. ABC’s 8 p.m. hour averaged only 2 million viewers, but the broadcast saw audience growth as it continued … so much so that ABC ended up finishing the 10-10:30 p.m. slot as the No. 1 broadcast network across the board.