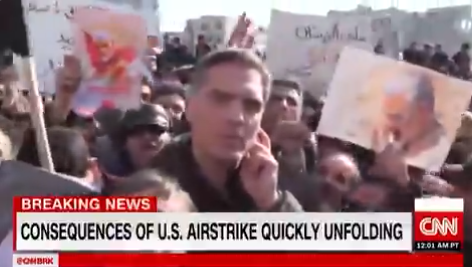 The streets of Tehran, Iran’s capital city, streets were full with Iranians today mourning the assassination of Iranian general Qasem Soleimani, who was killed by a U.S. drone strike in Iraq early Friday morning.

Soleimani was a powerful figure who headed the Islamic Revolutionary Guards Corps elite Quds Force and led Iran’s overseas operations. He also was a man responsible for the deaths of hundreds of American service members in Iraq.

But based on this reception, Soleimani appears to have been extremely popular among Iranians.

The mourning over Soleimani’s death quickly turned into an anti-American protest as the day continued. Some shouted “down with the USA” and “death to America.” Iranian state TV claims that millions filled the streets.

ABC News chief global affairs correspondent Martha Raddatz is in Tehran too. She reported from Tehran earlier today, and her segment on the protests aired this morning on GMA. It’s worth noting that Tehran is 8 hours ahead of EST.

“A powerful combination of grief and anger, with shouts of ‘death to America’ echoing through the streets around us.” https://t.co/Ho2Tizj1C6@MarthaRaddatz reports live from Iran. pic.twitter.com/kFrcKycwSg

CNN senior international correspondent Frederik Pleitgen is in the thick of things as well. He arrived in Tehran on Friday. CNNI has Arwa Damon and Jomana Karadsheh in Baghdad today. 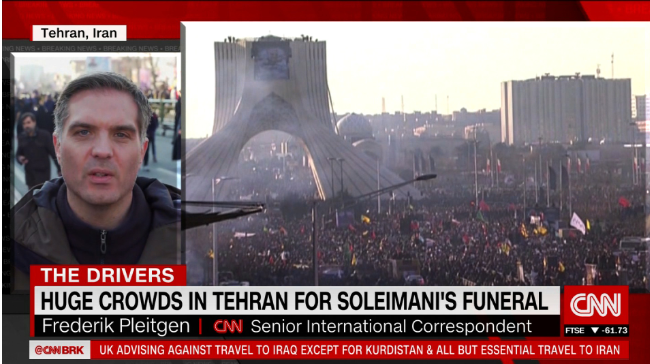 As Iranian general Qasem Soleimani’s body was carried through Iran, thousands of people flooded the streets to honor the country’s top military leader who was killed by a US airstrike in Baghdad. @fpleitgenCNN reports from Tehran, Iran. https://t.co/FwkazOwH5g pic.twitter.com/SsmgAFCZFo

CBS News correspondent Elizabeth Palmer is also reporting from Tehran. In addition, the network has Holly Williams reporting from Baghdad, Ian Lee is in Erbil, Iraq and Seth Doane is in Israel. Palmer appeared today on CBS This Morning. 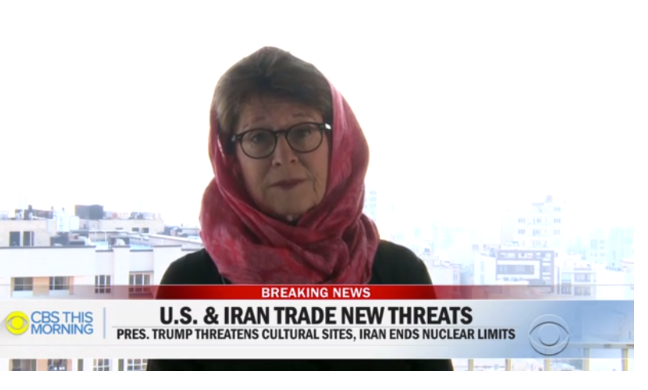 Police say millions of people attended a funeral for Iranian general Qassem Soleimani. His successor is publicly vowing revenge, and more than 3,000 additional U.S. troops are headed for the Middle East.@elizapalmer is in Tehran. https://t.co/1DB2wgmVUe pic.twitter.com/mw7WnWnNVX

Palmer is set to appear on The CBS Evening News tonight with the latest breaking news from the region and what to expect going forward.

Richard Engel continues to report from Erbil for NBC. Here he is on Meet the Press yesterday:

“There was a rocket attack into the green zone and I’m once again here on a rooftop in Iraq talking about Shiite militas and troops coming to the region.” pic.twitter.com/CF9TUZ79z2

NBC News’ Tehran Bureau Chief Ali Arouzi is also in Tehran. He appeared on The Rachel Maddow Show as news of the strike broke last week.

Here he is reporting for MSNBC Live with Katy Tur not long ago. 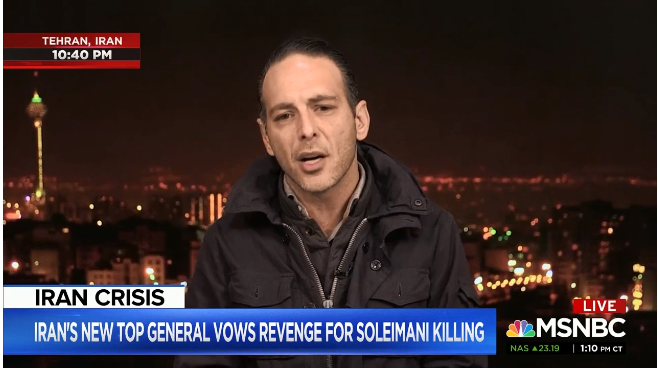 Live from Baghdad this evening. pic.twitter.com/Thnn6CX2A6