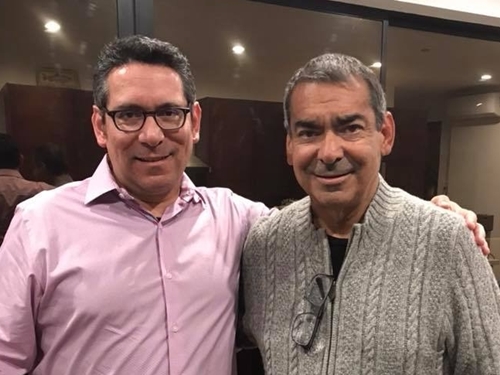 Late last year, veteran ABC News correspondent Jim Avila was told by his doctor that he would need a new kidney.

“And then about three months ago,” he tells TVNewser, “they said, ‘You need it immediately.’ There was a change.”

That’s when his “big race,” as Avila calls it, began. “I had to find a donor and get a transplant within three months or so, or else I would have to have dialysis. And that was a non-starter for me.”

Enter Jaie Avila, the youngest of the five Avila siblings, who, like his brother, is a a TV news reporter.

Jaie was the closest possible match out of the immediate Avila clan – which includes Jim’s three grown children. Jaie agreed to donate one of his kidneys. Jim’s doctors were able to quickly schedule the surgeries, to be performed in separate but adjacent operating rooms Tuesday morning in Los Angeles.

“I didn’t ask anybody” to be tested for compatibility, Avila says about his family. “They all volunteered. It was very heartwarming.

“And I felt like karma actually is real. All the good things I tried to do in my life paid off. I tried to be a good father, a good brother.” Jim, the oldest of the Avila clan, says he’s “kind of the patriarch, my father died twenty years ago. Jaie has given me an unbelievable gift.”

Avila’s kidneys are only functioning at about 14 percent, damage that stems from his diabetes. It’s the leading cause of kidney failure.

Avila, 62, says he’s looking forward to returning to work when his doctors give him the all-clear, and has “nothing but praise” for the way his network bosses have handled his leave. “I’m thankful for ABC, the way they’ve treated me.”

Avila also feels “very lucky” to have the support of family and friends, including numerous colleagues from his local and network news career who have reached out to wish him well.