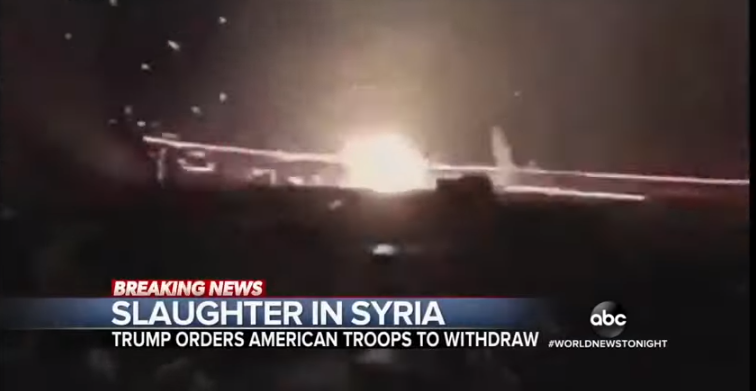 ABC World News Tonight made a rather significant boo-boo last night, and unfortunately it carried over to today’s edition of Good Morning America.

A video aired during Sunday’s World News Tonight that anchor Tom Llamas said depicted a Turkish military attack in northern Syria against Kurdish civilians. Turkey is indeed pushing into Syria and killing Kurds. However, the video World News Tonight Weekend used is actually footage from a military gun demonstration in Kentucky that was posted on YouTube in 2017.

However, that doesn’t appear to be true.

As Gizmodo first pointed out, the explosions in the video are identical to explosions seen in a video titled, “Knob Creek night shoot 2017.” Knob Creek Gun Range, located in Kentucky, hosts a an event called the “Military Gun Shoot & Military Gun Show” where weapons are fired at night. According to the site, the public can come and check out the show for a fee in April and October.

“This video, obtained by ABC News, appears to show the fury of the Turkish attack on the border town of Tal Abyad two nights ago,” correspondent Ian Panell added during the Sunday broadcast.

See for yourself. The first 52 seconds are from World News Tonight, presumably showing Turkish military strikes on Syria, while the next 28 seconds show footage from the 2017 Kentucky military gun show.

We hear that the network is investigating what exactly happened.

To its credit, ABC News acknowledged the error. “We’ve taken down video that aired on World News Tonight Sunday and Good Morning America this morning that appeared to be from the Syrian border immediately after questions were raised about its accuracy,” an ABC News spokesperson tells TVNewser. “ABC News regrets the error.”