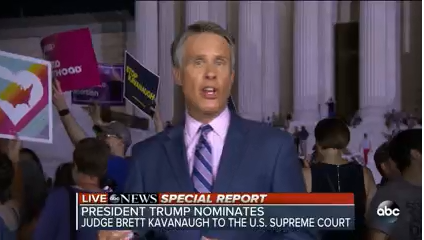 I was broadcasting from the SCOTUS plaza until 11:00PM that night. The protests were raucous; chants, posters and bullhorns on both sides. But I found it very democratic, all-American. I saw pro-choice and pro-life demonstrators arguing—passionately but civilly. I felt no threat. https://t.co/7gwTDgUhEG

Moran’s view seemed to be different from that of Fox News anchor and Supreme Court reporter Shannon Bream, who reported from just outside the Supreme Court Building at the same time as Moran: 9:19-9:20 p.m. ET. 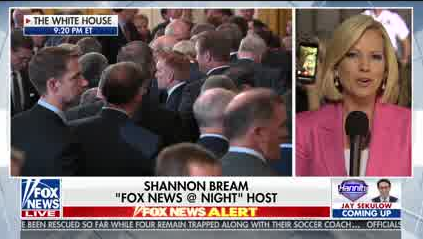 She told The Wrap yesterday: “People were jostling around, getting physical. People were standing behind me while I was trying to do live shots. It was pretty unnerving.” She also added that “a small group of people who were yelling and getting in our faces were saying things that were anti-Fox,” and “I want to sing the praises of the U.S. Supreme Court police because they’re always fantastic. They always do a good job. But last night the barriers weren’t there.”

Bream was supposed to anchor her 11 p.m. ET newscast from the same area, but she and her team made the decision to head back to her D.C. studio due to a “volatile mood” at her broadcast location.

Hi @TerryMoran congratulations on feeling safe the other night. Just because it didn’t happen to you doesn’t mean it didn’t happen to someone else. @ShannonBream is one of the most honest people I know. You should support other journalists not question them. https://t.co/awl8H9zVEL

I’m genuinely glad you felt safe. It was a rowdy night out there. I’ve done many a liveshot in the midst #SCOTUS protests, but our team was put in a situation that made us uneasy. We had to make a last minute call about moving the show, and did so out of an abundance of caution. https://t.co/ljkTfY7guZ