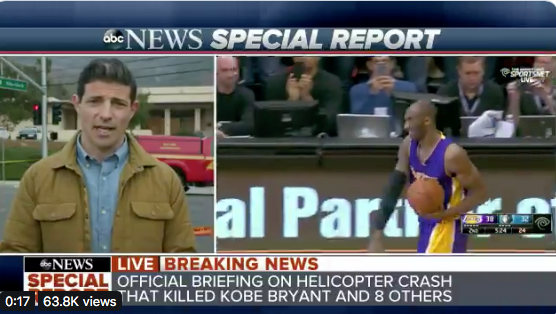 ABC News chief national correspondent Matt Gutman has been suspended by the network after reporting on Sunday that all 4 of Kobe Bryant‘s children “are believed to be on that helicopter with him, all daughters, one of them a newborn.”

That report turned out to be incorrect. The tragic Sunday morning helicopter crash in southern California claimed the life of the Los Angeles Lakers icon, 1 of his 4 daughters, 13-year-old Gianna, as well as 7 others.

The L.A. Times broke the news of Gutman’s suspension.

An ABC News spokesman confirmed the suspension to TVNewser, and provided us with the following statement: “Reporting the facts accurately is the cornerstone of our journalism. As he acknowledged on Sunday, Matt Gutman’s initial reporting was not accurate and failed to meet our editorial standards.”

Gutman released a statement of his own: “We are in the business of holding people accountable. And I hold myself accountable for a terrible mistake, which I deeply regret. I want to personally apologize to the Bryant family for this wrenching loss and any additional anguish my report caused.”

Today I inaccurately reported it was believed that four of Kobe Bryant’s children were on board that flight. That is incorrect. I apologize to Kobe’s family, friends and our viewers. pic.twitter.com/yYwuB9vpZl

Here’s the transcript of the ABC News Special Report, which began Sunday at 3:06 p.m. ET when ABC News cut into ABC’s broadcast of the 2020 Pro Bowl. Tom Llamas anchored the report, with Gutman joining by phone from California.

Llamas: We come on the air with this tragic news coming in from California. A source confirming to ESPN that NBA legend Kobe Bryant has died in a helicopter crash in Southern California. The Los Angeles county sheriff’s office confirming that five people are dead in that crash near Calabasas. (video of wreckage is shown), northwest of downtown Los Angeles. Video from the crash site showing the wreckage on fire in the hills near a building complex. First responders are on the scene. Bryant who was 41 years old and had 4 daughters played for the Lakers and is the NBA’s 4th leading scorer of all time. Tweeting his respect to LeBron James just 16 hours ago last night when James passed him. Let’s go straight to ABC News senior (chief) national correspondent Matt Gutman who’s on the phone from California. Matt, what do we know about this crash?

Gutman: We know that it happened about an hour ago, Tom, and pretty quickly an APB went out to most of the cops in the area called the hill division of the L.A. County Sheriff’s Office. It said: “5 people down in a helicopter crash. it’s believed Kobe Bryant is there.” Rescue personnel have been swarming there. I’m heading there right now. I think you mentioned something really important in your preface to this and that is that Kobe Bryant played 20 seasons here in L.A. It is hard to underscore how important Kobe was to Los Angeles. He brought the Lakers back. He defined an entire generation for people. Just before I ran out the door my wife said, “oh my lord, we grew up with Kobe.” The fact that 4 of his children are believed to be on that helicopter with him, all daughters, one of them a newborn, is simply devastating. So, this is going to really hit hard in southern California. Obviously everybody hoping that this is not the case but, you know, from the police reports right now, it appears that Kobe Bryant is down in that helicopter right off the hills of Calabasas so near to where he played all those seasons as an L.A. Laker.

Llamas: News that has shaken not only southern California, Matt, but has shaken so many across this country. When you see the wreckage video, you can understand why no one was able to survive that crash. Again, a source confirming that ESPN that NBA legend Kobe Bryant has died in a helicopter crash. We will have complete coverage tonight…