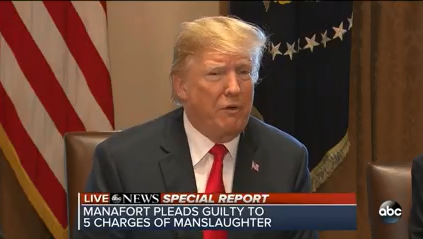 That’s what many ABC viewers were probably thinking when the lower third of an ABC News special report during the 12 p.m. ET hour read: “MANAFORT PLEADS GUILTY TO 5 CHARGES OF MANSLAUGHTER.”

But that isn’t true. Manafort is in jail awaiting trial on a number of charges including money laundering and making false statements, but nothing to do with manslaughter.

The graphic (above right) stayed up on screen from 12:21:30 p.m. – 12:21:37 p.m. ET, before the producers apparently figured out what happened, and transitioned to the chyron below, one with a headline far more pertinent to the topic at hand: President Trump making comments on immigration and the separation of children from their parents at the border. 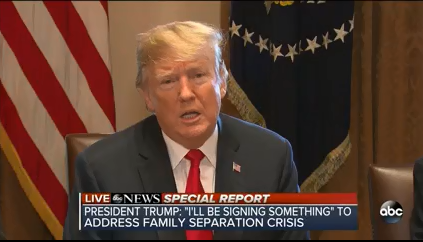 ABC News, to its credit, apologized for the bizarre and inaccurate graphic.

Statement from @ABC News: We regret and apologize for the false lower third graphic that aired during our special report. We are investigating how incorrect information was in our system and how and why it was allowed to air. (1/2)

(cont.) We apologize to our viewers and to Mr. Manafort. There simply is no excuse for this sort of mistake. (2/2)

Update: Looks like someone else caught wind of the mistake … four hours after the fact:

Look what Fake ABC News put out. I guess they had it prepared from the 13 Angry Democrats leading the Witch Hunt! #StopTheBias pic.twitter.com/c0XOk1btEQ