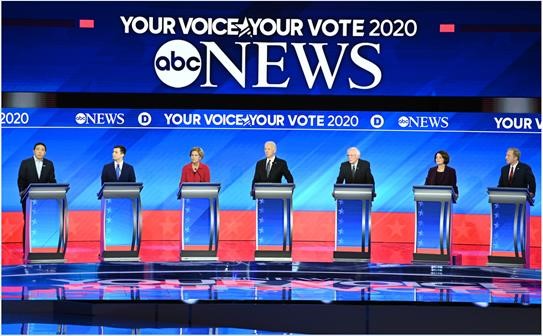 Moderated by George Stephanopoulos, David Muir and Linsey Davis, the Friday, Feb. 7 debate ranked as the No. 1 program on TV among Total Viewers, and Adults 25-54 news demo on Friday evening.

In fact, this debate out-performed the previous 3  Democratic primary debates (all of which aired on cable), and was the most-watched debate since the 4th of the current cycle. That one aired on CNN, took place on Tuesday Oct. 15, 2019, and drew 8.55 million total viewers with 2.43 million in the 25-54 demo.

The debate numbers are still a big drop from those held earlier in the cycle. The first Democratic debate, held in June 2019 and co-hosted by NBC News, MSNBC and Telemundo, drew 15.3 million viewers across those 3 networks on the first night and 18.1 million viewers on its second night.

This is ABC’s second debate of the current presidential cycle. Its most-recent debate (which it co-hosted with Univision) took place last September on a Thursday, a night of the week which is far more conducive to TV viewing. And if the DNC was looking to spark interest among younger voters, having a televised debate on a Friday night probably isn’t the way to go.

Nevertheless, 7.9 million is a solid total audience for ABC on a Friday evening, and even though those figures are down from mid-2019 debates, ABC News execs are likely OK with the results.