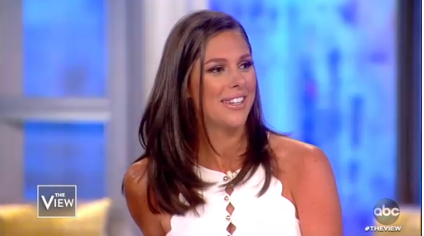 Abby Huntsman‘s tenure on The View is ending, and her final appearance as co-host is this coming Friday.

A member of a powerhouse family in the state of Utah, Huntsman is leaving the ABC panel program to help run her father, Jon Huntsman Jr.’s campaign for governor of Utah.

This is not Huntsman Jr.’s first run for governor of Utah. He was the state’s governor from Jan. 2005 – Aug. 2009. He then served as U.S. Ambassador to China from Aug. 2009 – April 2011, before embarking on what was ultimately an unsuccessful run for the 2012 GOP presidential nomination. Huntsman Jr. also served as U.S. Ambassador to Russia during the Trump administration (Oct. 2017-Oct. 2019).

According to an ABC News report, when Huntsman Jr. launched his gubernatorial campaign, he came to his daughter for help, eventually asking her to help run it. Over The View’s winter break, she came to the decision with her family to leave the show.

Huntsman’s tenure on The View was relatively brief. She joined the show in August 2018 for its 22nd season after a 3-year run at Fox News. Huntsman joined Fox News as a general assignment reporter in 2015 and was named Fox & Friends Weekend co-host in December 2016.

Prior to joining FNC, Huntsman served as co-host of MSNBC’s The Cycle and was a host and producer for The Huffington Post’s streaming network HuffPost Live. The UPenn grad started her post-collegiate career in TV news as a news desk assistant for ABC News in Washington and an assistant booker for GMA in New York.

The View is now down to 1 conservative panelist: Meghan McCain. One would think Huntsman’s replacement will bring a conservative viewpoint to the program, but we’ll find out for sure soon enough.

Wishing my amazing friend and co-host @HuntsmanAbby nothing but the best on her next chapter! @TheView is less without you and your light. I wish you, your family, & your father @JonHuntsman’s campaign all the absolute best. He’s lucky to have you officially lead his team! ♥️🇺🇸

Back to my Utah roots campaigning with this guy. Democracy in action ❄️ 🏔 🇺🇸