As COVID-19 continues to spread across the nation, a series of the Knight Foundation/Gallup surveys taken from March 17-29, the results of which are now out, finds that Americans are paying “a great deal” of attention to the news at levels not seen over the past three years. Attention to local and international news has doubled since December 2019, and attention to national news has increased 13 percentage points.

In fact, almost all Americans have heard either a great deal (82%) or quite a lot (15%) about the novel coronavirus.

Speaking of national news, in its surveys, Knight/Gallup also asked Americans to name their top national news sources for coverage of the coronavirus. The responses were then grouped into four different categories, based on the ideological mix of those sources, according to separate coding schemes developed by third-party researchers.

According to the Knight/Gallup survey, “liberal news diet” described those naming liberal news sources, with CNN, MSNBC, The New York Times and Vox as the top ones.

The “undesignated” refers to those who provided generic categories (e.g., internet, newspaper, TV) or who did not answer the open-ended question.

The Knight/Gallup survey found that over half of Americans with a conservative news media diet (57%) believe COVID-19 is no more deadly than the seasonal flu, compared with 36% who have a mixed news diet and 28% with a liberal news diet.

Unfortunately, those 57% of Americans with a conservative news media diet have been gravely misinformed. COVID-19 causes more severe disease than seasonal flu. According to the WHO, globally, about 3.4% of reported COVID-19 cases have died. By comparison, seasonal flu generally kills around .01% of those infected.

However, the survey does add it is possible the gap between these groups has narrowed since the data was collected in late March.

The Knight/Gallup survey found even larger gaps between those with liberal versus conservative news diets on whether the media is giving too much attention to the coronavirus (28% and 71%, respectively), and whether Pres. Trump is doing an excellent or good job of handling the U.S. response to the coronavirus (11% of liberal news diet consumers and 94% of conservative news diet consumers).

There’s also the education breakdown, which you can see below. 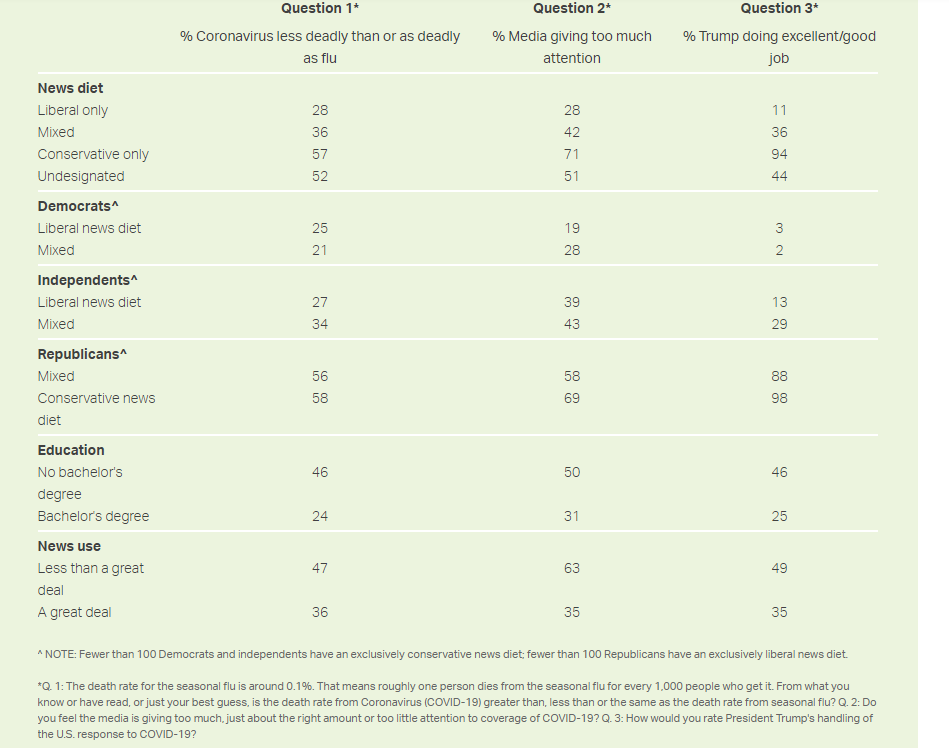 According to the survey, overall, 33% of U.S. adults now have a liberal news diet, 34% a mixed diet and 19% a conservative diet. That’s consistent with precoronavirus news consumption habits.