NEXT:Bill Shine Is Receiving Millions of Dollars From 21st Century Fox While Getting Paid by the White House
PREVIOUS:The President Suggests the United States 'Should Start Our Own Worldwide Network' 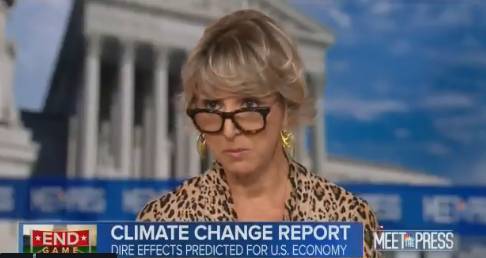 The federal government released a 1,600-page U.S. Climate Assessment on Friday, which sounds the alarm about the devastating effects that climate change is having on our environment and on the U.S. economy right now and in the years to come.

While the overwhelming majority of Americans understand that climate change is a real and significant problem which will cost American resources, jobs, and lives, now and in the decades to come, some talking heads seem to feel otherwise.
The shows that have booked climate change skeptics have been getting criticized for doing so. It came to a head on Sunday.

NBC’s Meet the Press with Chuck Todd booked Danielle Pletka from conservative think-tank American Enterprise Institute for Sunday’s broadcast. When asked about the report, she remarked, “I’m not a scientist. I look at this as a citizen. I see it so I understand it. On the other hand, we need to also recognize we just had two of the coldest years, biggest drop in global temperatures that we have had since the 1980s, the biggest in the last 100 years. We don’t talk about that because it’s not part of the agenda.”

Right-wing panelist on Meet the Press on climate change: “I’m not a scientist … We need to also recognize we had two of the coldest years, biggest drop in global temperatures that we have had since the 1980s, the biggest in the last 100 years. We don’t talk about that.” pic.twitter.com/OLPUZOpoKR

And I actually think we should be hysterical. I’m going to disagree with you on this. I think anybody who has children or anybody who can imagine having children and grandchildren, how can you look at them and think this is the kind of world that through our own inaction and our inability to do something, that we’re going to leave them? I think I’m really glad that you’re actually having us talk about this on this show because I think it was the height of cynicism to release this report on Black Friday by the Trump administration. And I just think that at some point, we are going to need not just the political leadership, but also the corporate leadership to actually sit down and do something about this.

A number of politics observers were taken aback by Pletka’s sentiment:

Lord have mercy. @chucktodd Chuck, next time why don’t you have folks on who argue the world is flat. This is crazy. Balance shouldn’t be the goal, truth should. https://t.co/9fIxy0LWaD

This is an embarrassment for @NBCNews and @MeetThePress.

People tune in to be informed not be subjected to propaganda. https://t.co/h5RC3vxgIy

WTH? This is completely untrue. What is the matter with these shows? https://t.co/zxb4lTgjm1

Maybe if we are going to ask people about climate change on a show they should either be an expert or know how to read something written by one?

.@ChuckTodd: I like your program. But this critique is fair. Why didn’t you have one of us on to discuss the report? Many of us are practiced at media & appeared on other national news programs (including @MSNBC) to provide the authoritative, objective assessment viewers deserve. https://t.co/xCIkHwi2na

Pletka responded to the critiques this morning, telling Politfact’s John Kruzel: “Had I said that God is dead, there would have been less of an outcry. Note, I commented that I have little doubt climate change is real. This is an area in which scholarship and science play no role, notwithstanding the pieties of its adherents. It is a religion.”

Former Pennsylvania governor, and CNN political contributor Rick Santorum was perhaps more provocative than Pletka in his assessment, stating the following on State of the Union with Jake Tapper (hosted by Dana Bash):

“If there was no climate change, we’d have a lot of scientists looking for work. The reality is that a lot of these scientists are driven by the money that they receive. And of course, they don’t receive money from corporations and Exxon and the like. Why? Because they’re not allowed to, because it’s tainted. But they can receive it from people who support their agenda. And that, I believe, is what’s really going on here.”

The tweet below is from progressive media watchdog outlet Media Matters:

CNN’s Rick Santorum praises Trump administration trying to bury report on climate change: “A lot of these scientists are driven by the money” pic.twitter.com/ndwpkQHUxH

How will our grandchildren see us? https://t.co/3buQ3PnlX0

There’s no polite way to say this: Santorum is a dolt, and CNN’s use of him as a talking head is accommodating the voice of a village idiot not that of a sensible conservative. https://t.co/XQ8q3cPLp9

It’s also worth noting that the Sunday shows didn’t feature climate scientists to talk about the report, only politicians.

Chris Wallace led Fox News Sunday by bringing up the federal climate report in a pre-planned interview with Sen. Ben Sasse, but there wasn’t an actual climate expert on the panel portion of the program to talk about it. ABC failed to have a climate expert on their Sunday show as well, despite the fact that, as Dr. Mann tweeted, many are media trained.

If you’re going to talk about science and climate change, it wouldn’t hurt to book someone who is an expert in the subject. Perhaps this is something the networks will consider going forward.