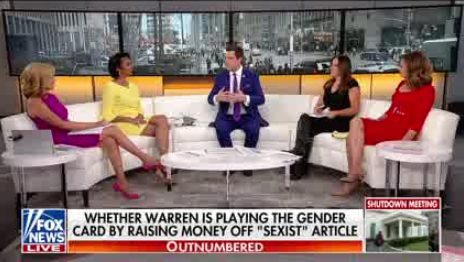 He also decided to give sitting Massachusetts senator Elizabeth Warren the derogatory nickname of “Sacagawea.”

“I know the president likes to call her Pocahontas, but now that she’s making her way into the eastern seaboard, maybe Sacagawea would be more appropriate,” Gaetz remarked.

“When you when you say things like that, half the world’s thinks you that you’ve made a racial slur,” panelist Melissa Francis responded.

Gaetz said that his point wasn’t really about Native American heritage, per se, rather “it’s about trustworthiness.”

Sacagawea is well known as the Shoshone woman who accompanied the Lewis and Clark expedition back in the early part of the 19th century, from the northern plains through the Rocky Mountains to the Pacific Ocean and back.  Not only did she serve as a translator for the group, as a bridge between native peoples and the explorers, but her knowledge of the terrain also came in handy during the expedition.

In terms of the appearence itself –  According to Fox News, Rep. Gaetz was not on the show as host, which goes against what his office stated earlier in the day. 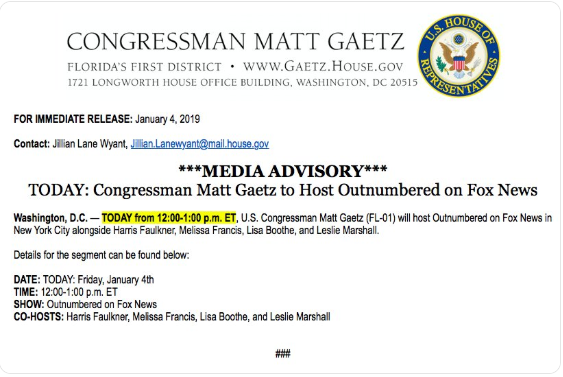 Rep. Gaetz was actually on as a guest, the network as, the show’s “#OneLuckyGuy” who traditionally sits on the couch between the female hosts, who today were Harris Faulkner, Melissa Francis, Lisa Marie Boothe, and Leslie Marshall.

Fox News vp of news Alan Komissaroff put out the following statement concerning the congressman’s appearance on the program today:

“Multiple politicians and pundits on both sides of the aisle have appeared as the ‘One Lucky Guy’ on Outnumbered as the show is formatted to have a rotating guest. Rep. Gaetz appeared in this capacity and did not co-host the show despite the factually inaccurate press release issued by his office.”