NEXT:Gayle King Talks About 'Starting From Scratch' With Her New CBS This Morning Co-Hosts
PREVIOUS:CNN Presents at WarnerMedia Upfront With Tagline: 'The Truth Has Never Been Easy' 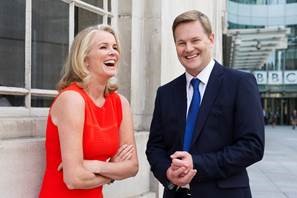 The BBC 50:50 Project, which endeavors to have each BBC English-language news, current affairs and topical programs to feature an equal number of male and female contributors, has yielded some pretty solid results to-date.

When the challenge was set last year by the BBC’s Director General, Tony Hall, 74 English language outlets and 10 World Service Language teams were already signed up to participate. At the time, 27% of them recorded having at least 50% female contributors – but that had nearly tripled to 74% by this April.

The programs which hit the 50:50 target this April include BBC World News’ nightly public affairs show Beyond 100 Days (co-anchored by Katty Kay and Christian Fraser), as well as Outside Source, whose presenter Ros Atkins started the 50:50 Project, Click, Asia Business Report , Impact, The Real Story, World News America, GMT, From Our Own Correspondent, Global, Newsday, World News Business and Focus on Africa.

The BBC World Service has also made noticeable progress in the same time period. BBC Persian radio was up from 9% to 50%, BBC Urdu radio was up from 22% to 58% and Hindi TV increased from 48% to 58%. BBC Arabic also saw some significant increases and across the whole World Service, 61% of the teams surveyed reached 50% women representation – an overall increase of 44%.

Over the course of the year, hundreds more programs from across the BBC – from news to entertainment to music – have joined the project.

The project has been so successful that the BBC has shared the methodology with other media outlets and is working with more than 20 external partners who are now signed up to replicate the project, including ABC News, Fortune and The Financial Times.

“It’s amazing to see such a remarkable change in just a year – you can see and hear it right across our programming,” Hall said in a statement. “I want the BBC to lead the way on equality and fairness, and this project demonstrates what can be achieved. Better representation is something the whole media industry needs to address so I’m really pleased others are now following us and adopting this project for their own organisation.”

BBC Director of News Fran Unsworth added: “We want to ensure the BBC reflects its audiences better – and that’s at the heart of the 50:50 Project. It’s extremely encouraging to see the progression made by so many teams to ensure we have more female voices represented across our news and current affairs output and it can only add to the quality of the programming we offer our audiences.”

The BBC’s 50:50 Project contributes towards the the company’s commitment to reach 50% women on-screen, on-air and in lead roles across all genres from Drama to News by 2020.