NEXT:Sean Spicer Calls Hitler Comment 'Inexcusable' Asks For 'Forgiveness'
PREVIOUS:Jim Acosta: 'We Are Not the Opposition Party, We Are Just Trying to Get at the Truth' 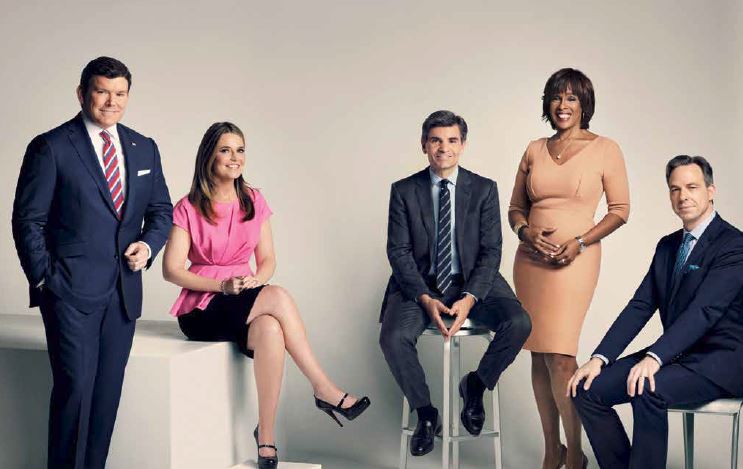 The Hollywood Reporter’s Marisa Guthrie gathered anchors from 5 networks, including NBC’s Savannah Guthrie, ABC’s George Stephanopoulos, CBS’s Gayle King, FNC’s Bret Baier and CNN’s Jake Tapper, to talk about Trump, their worst-ever interviews, their dream “gets” and another big TV news name who is set to return to the airwaves.

THR: You worked with Megyn Kelly for a long time, Bret. Now Savannah is going to begin working with Megyn. What is the one thing Savannah should know about Megyn?

BAIER: She has an amazing sense of humor. And she can cut up, like just suddenly turn it on.

GUTHRIE: She and I have a lot in common, actually. We both went to law school and then ran screaming for our lives away from the law. We both came up in D.C. But yeah, we’re excited to have her. I think she’s going to be great. We feel lucky. We feel like it was a great get. KING: Well, not if you believe what we’re reading in the papers.

GUTHRIE: Well, I appreciate that, Gayle! You need to read a better paper. (Laughter.)

BAIER: There is fake news out there, Gayle.

GUTHRIE: Yes, there is.

KING: So I’ve heard. (Laughter.) But Megyn Kelly is terrific. I’m excited that she’s coming back on TV.

In terms of their worst interviews ever, King chose Frank Zappa, Guthrie said Khloe Kardashian, Stephanopoulos’ response: “You could go back to my first two years of GMA, take anything from the second hour.”

And after missing the Trump phenomenon in 2016, how will they change their coverage of 2018 and beyond:

“We all missed it. We all missed the whole thing, I think, collectively,” said Baier. “Also the crowd size, too, guys. At 1, 2 in the morning, the [crowds] that turned out for Donald Trump were a very big indication that I don’t think enough of us paid attention to,” said King.