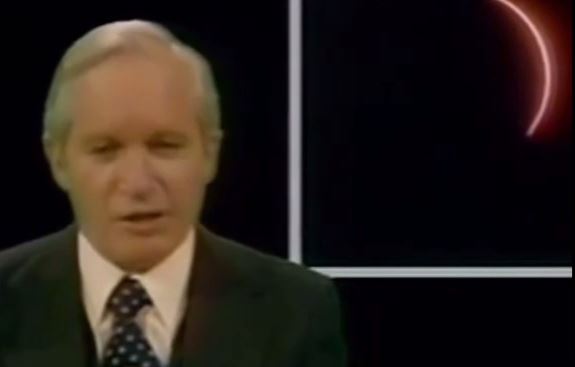 ABC News is among the network news divisions planning big coverage of the total solar eclipse later this month, just like legendary ABC News anchor Frank Reynolds promised during the last one, in 1979.

“Not until August 21, 2017 will another eclipse be visible from North America. May the shadow of the moon fall on a world in peace. ABC News, of course, will bring you a complete report on that next eclipse 38 years from now,” said Reynolds, who died in 1983.

This time around, David Muir, who was 5 years old the last time, will lead ABC’s coverage which they are calling The Great American Eclipse. ABC will produce a 2-hour special, from 1 p.m. – 3 p.m. ET, as well as coverage on Good Morning America and World News Tonight.

Muir will be in Charleston, SC, chief meteorologist Ginger Zee will be in Nashville and meteorologist Rob Marciano will be in Lincoln City, OR. Other correspondents including Rebecca Jarvis, Matt Gutman, Sara Haines, David Kerley, Clayton Sandell, Nick Watt, Eva Pilgrim, T.J. Holmes and Adrienne Bankert will be stationed all over the country.

The team will report from viewing parties and landmarks, interviewing spectators as they witness the event. Viewers are encouraged to submit photos and videos to ABC.