NEXT:30 Most Impactful TV Newsers of the Past 15 Years: Hoda Kotb
PREVIOUS:Joe Scarborough & Mika Brzezinski Are Apparently Co-Hosting Morning Joe From Florida Without Telling Their Audience 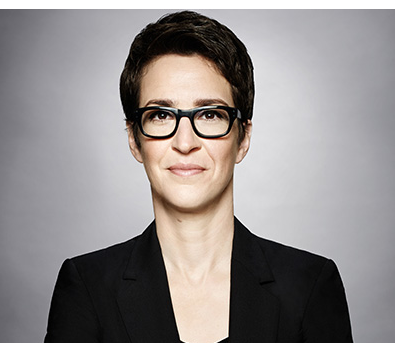 Maddow: I was working for a great local radio station in Northampton, Massachusetts —WRSI — hosting a morning drive show called The Big Breakfast.

What’s your favorite professional moment of the past 15 years, and why?

One Friday night a few years ago, I was making a drink live at the end of the show for a segment we called the Cocktail Moment. The drink called for an egg white, but I accidentally dropped the yolk in, too—live on the air, with all the other ingredients already in the cocktail shaker! My partner, Susan, was in the studio that night, and she stage-whispered to me, ‘Scoop it out!’ Panicking, I grabbed the bar spoon, fished around and—what?!—ladled out the egg yolk intact. Which is completely impossible. I’ve never been able to do it again, ever. But that night it saved the f block.

Who have you learned the most from in your career? What did they teach you?

Andrea Mitchell. The biggest day-to-day challenges I have encountered in this job are all related: stamina, resilience, consistency, self-determination. Andrea is a North Star for every woman (and every dude!) in this business for all of these things.

Yes, you can wear the same darn thing on TV every single night. No one really cares.