NEXT:NBC Washington Has Been Posting Significant Daytime Ratings Growth During the Government Shutdown
PREVIOUS:30 Most Impactful TV Newsers of the Past 15 Years: Ann Curry 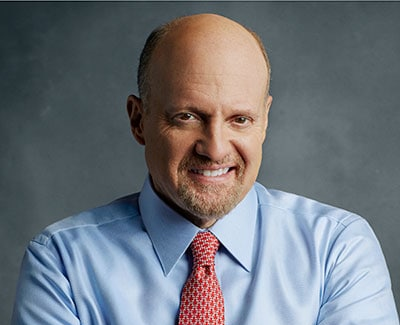 Jim Cramer:  I was partners with Larry Kudlow, we were doing Kudlow and Cramer. It was a talk show where we did battle and also had guests. And it’s kind of funny, because we’re pretty much aligned in the same positions, except for he’s moved on to politics, and I’m still working for CNBC. I was also doing a radio show, too, called Real Money, that was on a variety of stations, and that was in conjunction with my work that I was doing at TheStreet.com, which I had founded in 1995.

I think that TV news is now in the fight for its life against tailored news that you can get on the web. It’s made it so you have to be a more interactive and have more viewing for your regular viewer, because otherwise that viewer is just going to go to the web to get this news. So it’s made you have to up your game, and you have to be far more accessible because the viewer is naturally, just like they did with newspapers, gravitating away, so you have to combat that with different kinds of programming.

The person I’ve learned the most from would be Jim Stewart, who is a fabulous, Pulitizer Prize-winning reporter/writer. What he has done is said, “tell stories.” If you don’t tell stories, you will not have any viewers or listeners. If you tell news, that’s a commodity. But good stories are proprietary and can always hold up, no matter what the circumstances are. That’s been his lesson since when I first met him in 1980, and he’s been teaching me for 38 years.

Which of your competitors do you most admire, and why?

Erin Burnett at CNN, who does combination of business and news. I think she’s remarkable. She uses her business knowledge she got from us, and she uses her knowledge of the world from her extensive travels. I think that she’s an inspiration to a lot of people. She has a family, she’s a terrific person, always bright and enthusiastic, but has managed to be able to take her business knowledge and make it so that she probably has the best economic grasp of anyone who’s not on our network. And I would trust her for what she says when she talks about the economy and the way she positions things. It’s really pretty terrific.

15 years ago I thought that earnings of companies and fundamentals of companies  controlled 50 percent of a stock’s action, and the other 50 percent was its sector. Now, I regard politics as far more important. I didn’t see that coming until later. I regard the ETF (exchange-traded fund) as far more important and how a company is actually doing itself as far less important than it used to be. And that’s a strange thing for someone like me, who loves the so-called fundamentals. That’s just changed, and I’ve had to adapt to it. I didn’t want to, I always felt that if you did your homework on individual companies, you could really help people. But it doesn’t work. It’s just too small a part of why a stock moves. Which is remarkable. It’s a huge change. I used to think, if I knew what Intel was going to do … how Intel is doing itself doesn’t really matter nearly as much as whether the president’s in a war with China. The stuff that I’ve learned … I’d had to retool in a way that I wish I didn’t have to do, because I don’t have … there’s no predictability involved with the other factors, whether it be the Fed for the President. There’s just no predictability, whereas before, my work would demonstrate that … here’s five tech stocks that … I came up with this term, FAANG. Facebook, Amazon, Apple, Netflix, Google. I came up with it, and I still like it but they all trade together now, because so many people have adopted it. So it’s like, if you know how Alphabet is going to do, you know how Facebook is going to do. That was never the case. C&C stocks didn’t trade in lockstep. But they all trade in lockstep because of the way that the market has changed, and I’ve had to change with it.

Jon Stewart tried to derail me [when I appeared on The Daily Show in 2009], and what you had to do was say, “OK, look, I’m just going to go out there and do my best. And the next day and the next day.”  And I know he mentioned on Howard Stern’s show that I didn’t really exonerate you, or whatever. I think he mentioned that perhaps I wasn’t the right person to pick on. But it didn’t matter. I had to come back, and it’s not one of those, he who laughs last… because  it was very painful for me and my family, professionally, what he did to me. But you overcome it, and you go to work everyday, and it’s been a decade or so, and I feel like what you do is you don’t quit. Even when someone wants you to quit, you quit on your own, you don’t let someone else make you quit. And I wasn’t going to let anyone, no matter how serious or funny or smart they think they are, stop me. Because I like my work, and so I come to work and put my clothes on, get mic’d up, and think I do a good job. Or else I wouldn’t be doing it, because I don’t need to do it.