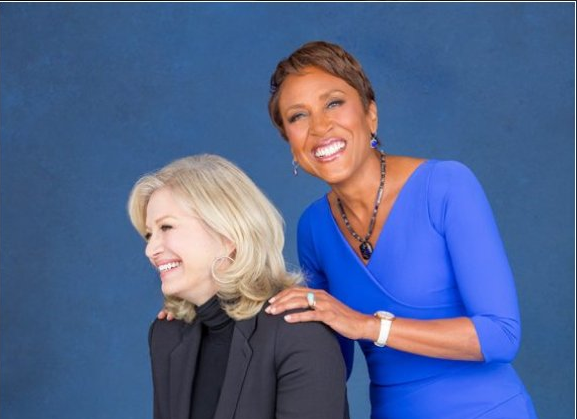 They are also co-cover stars of the January 14 issue of Adweek magazine, which celebrates 15 years of TVNewser. The issue is out in print and online today, so go check it out!

Adweek TV/Media Editor Jason Lynch and I interviewed Sawyer and Roberts earlier this month for the cover story, which you can access here.

In addition to serving as cover stars for this week’s TVNewser-themed issue, Sawyer and Roberts are among Adweek’s 30 Most Impactful TVNewsers of the Past 15 Years.

For Adweek, Lynch and I interviewed 30 of the 31 honorees (we’re counting MSNBC’s Joe Scarborough and Mika Brzezinski as one), and asked each honoree the same questions. Answers to a couple of those questions can be found in the print and online versions of the feature, but we’ll include more from our conversations with each honoree in posts that will go up throughout the remainder of January.

Today, we’ll combine Sawyer and Roberts into one item. Tomorrow, you’ll find our Q&As with fellow Top 30 honorees Christiane Amanpour and Maria Bartiromo. The Top 30 Q&As will be published in alphabetical order.

Adweek: We’ve had so many changes since 2004 in terms of how we all consume the news with all these new social media outlets.  What’s the most significant way in which TV news has changed over the past 15 years?

Diane Sawyer: Velocity, acceleration, no seven-second delay and your ability to say well,  oh, I’ll think about this.  No, actually, off and running.

Robin Roberts: Yes and something that has changed – good storytelling is good storytelling.  How it is received, how it is consumed, that is different.  Are there people that are actually sitting at home at seven o’clock watching?  Not as much but they’re going to still see us.  They’re still going to see Good Morning – so I think that is the biggest difference.  I was just thinking the other day – I’m a student. I always watch us and so I remember, I used to set my VCR.  And then I used to set the DVR.  And now I go online and watch segments.  So *I* even watch it differently.  So can I be surprised how other people consume news and television?  But the bottom line is if you don’t have the content, if you don’t have the good storytelling, that’s something that will not change.

DS: I love that all the conventional wisdom that attention spans had so attrited that it was forever going to be—Vine was four seconds? Six seconds? And that now, we savor documentaries.  We were all coming in the next day and talking about Mr. Rogers and his neighborhood or we’re talking about Free Solo and that long-form has proven again that we want to sink into a story.  We want to learn everything we can about the story, at the same time that we love our quick hits.  So we can do both.

DS: And I learned floss.

What’s something that you didn’t know perhaps about the business in January 2004 that maybe you know now?

DS: Well I still and am always amazed how the audience finds something new or something important to their lives.  And I’ve never known how they do it exactly because you, I mean you see minute by minute, right.

And you can see they’re not exactly watching or they haven’t exactly clicked on whatever.  And then this thing comes on and it leaps as if we all know, we all know that we have to keep searching together.  Maybe that’s just my eternal optimism but we are searching.  We’re looking for strengthening answers.  I believe that.

RR: One thing that the many lessons that Diane has taught me that you want to – and I know you’ve heard me say this over and over again but I always attribute it to you and I love it.  You want to as a journalist in whatever we’re doing is for your story, for your piece to create a reaction that leads to action.  And so that, to me, I don’t know why that always stays with me that no matter – it doesn’t matter how short or long or serious or not serious or what we’re  doing— that you just want , and you can tell when there’s a reaction, but I think about the Mountain Dew Mouth and the little boy from Camden.

DS: Karim is in college.

RR:  But it’s something because she did a piece on these aspects that it actually like, for example, when she did something about in Appalachia and the problem with dental, because they drink Mountain Dew or whatever.  People were like, what do I do.  How do I help.  And I just love when whenever we do something that it creates this reaction from people and then they don’t just sit back and go like back to their lives.  They’re like they want to do something.  That’s unique.

For each of you as you look back on these 15 years, again we’re keeping within 15 years because of the TV News anniversary but what’s been your favorite professional moment in that time?  Diane for you it doesn’t necessarily have to be GMA related.  That’s up to you.  But for both of you what kind of stands out?  What resonates the most?

DS: Oh my goodness.  Do you know how old I am?  Really, you want me to scroll back through the decades.  I know this sounds simple, but it’s always someone you meet out in the field who says something impossibly eloquent or in the moment where you’ve come and you want to do something to help them and they actually say what can I do for you.  Can I help you?  And just to be reminded always of the generosity of people.  And I look back at it more as what we’ve forged, rather than one event.  I look back at being able when you’re not sure what’s coming up next and you’re led to the wrong piece and you can’t get your name right and being able to look at you, and I got this, and to see someone next to you saying, I got this.

RR: The times that we went out on the bus.  The bus tour.

RR: Out on the train.

Diane Sawyer: In the hurricane.

Robin Roberts: In fact I remember with the bus tour down in Mississippi, it was on my local affiliate where I started in television.  And my mother and father and sister had one of those cheesy GMA signs.  They’re like in the audience and the local news replayed that show forever.  I’m saying, how can you replay a news show, but they did that.  But for me when I went to – and again everything is always when it’s outside the studio, that we love being in the studio.  When I went to Tuskegee, Alabama, where I was born and my father was a Tuskegee airman and I got into that rickety plane like he flew.  And my father was still living and he was there and as only a father who has two children in television can say, that night we had done all the taping and then we were going to do some more work the next day.  We were going to go live the next day.  So we were at dinner and he said “daughter, do I have to wear the same outfit for continuity?”  And I’m like no dad, you can actually wear something else tomorrow.  Because he wanted to wear his red blazer with the other Tuskegee airmen.  But to be there and to when it was our fantasy.  It was like – and I love when we did things like that.  It’s like if you could do anything in the world, what would you want.  And I said I want to fly a plane like my dad did.  And it truly was one of those old trainers that he did.  And for him to be there and for those Tuskegee airmen to be there and to educate the audience because it wasn’t, you know, now people are a little more familiar with the Tuskegee Airmen but this was 2003, because he passed less than a year later.  So that was just – that was a moment.

Diane, we were talking before about you kind of making the decision to step away from the day to day and do more long form journalism.  As you look at the news cycle now and what Robin is going through every morning, what David’s going through every evening as far as just how insane it is what is your take on how the news cycle has changed so much and do you wish you were still a part of this or do you feel like I don’t even know how I would deal with the news changing every five minutes.  How do you feel about that?

DS: All of the above, in all directions! I really think as much as anything I keep thinking, this is great for us to have to get strong again in how we bring people information.  That we have to find new ways to do it.  We have to do it online in a way that succeeds and gets traction for a fact.  So I know we can and I know we’ve been through these before where we all had to evolutionarily leap ahead in order to make sure we do it better, we do it right.

RR: But it’s always been so important.  I know when people keep saying it’s never been more important to get it right.  It’s always been important to get the facts right.  It’s always been important.  That’s something, especially wihin our news division that we’ve all known that but yes, is it a different time?  And I still when something first happens I hear something, I go online first.  That’s the first thing like if I hear, if I’m out in the street and someone says something that’s the first thing I do.  And I check my social media and I say oh.  Then I go and I get further information from our news division.  So I’m just like everybody else.

It can be a tool when it’s used for good, and to be able to weed through the misinformation that’s out there.  But it’s been invaluable.