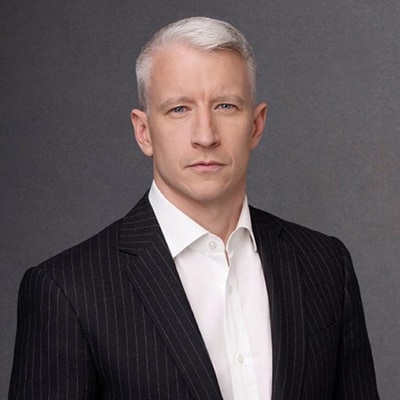 Anderson Cooper: I had been at CNN for two years at that point. In January I was hosting the New Year’s Eve celebration from Times Square for my second time I think.  I was still doing it solo, and as my regular gig, I had a show on CNN at 7 p.m.

It’s hard to pick one moment, but the opportunity to go to the frontlines of stories, and be on the breaking wave of history has been the great privilege of my life.  Whether it was reporting on Hurricane Katrina and its aftermath in 2005, or the earthquake in Haiti, to be able to bear witness and give people a voice is an extraordinary thing, and I feel so blessed to be able to do that.

Some of the technology now allows us to be live in places we never could broadcast live from 15 years ago. I spent hours in a Coast Guard helicopter during the floods in Houston broadcasting live while they were rescuing people from rooftops.  Also the speed of the news cycle is so fast now. People used to talk about a 24 hour news cycle. It now seems to be like a 24 second cycle.

I’ve learned the most from my executive producers and producers over the years.  David Neuman and Mitchell Koss at Channel One, Kathy O’Hearn and Kathy Christensen at ABC News, and Charlie Moore at CNN.  Also Jon Klein and Jeff Zucker are great producers, and the team of producers and correspondents at 60 Minutes have also taught me a lot.

I don’t view people as competitors.  The correspondent I most admired was [the late 60 Minutes correspondent] Bob Simon. He was the best writer in television, along with Jim Wooten at ABC.

Dealing with some of the attention that comes with being on television. I overcame it by choosing to ignore it.  I don’t read about myself, and I don’t think of myself as someone who is well known.  I find I’m happier that way.