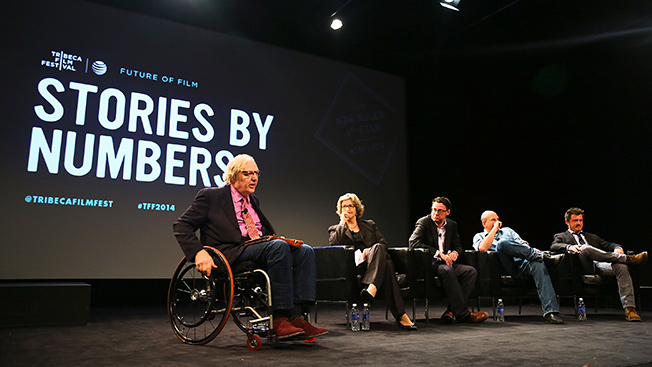 Despite being considered one of the greatest TV shows of all time, The Wire probably would have died on the vine if creator David Simon were pitching the concept today. Chalk it up to the industry’s slavish devotion to audience metrics.

"I'm not sure if The Wire could survive now," the former Baltimore Sun City Desk reporter said Thursday during the Tribeca Film Festival’s Story by Numbers” panel. "HBO will be the first to say, 'we only have [so many] hours to program for drama if the show is dragging wind,' even if it is a show that critics say you should watch because of X, Y and Z."

While Simon’s narrative about Baltimore’s criminal underbelly proved to be a critical darling, The Wire was never a huge ratings draw. (The Season 5 premiere drew just 1.1 million viewers, or about 5 percent of the HBO subscriber universe at the time.) Simon said the additional data on who exactly is watching and where they are consuming the media has made networks more conscious about their metrics—and as such, much more conservative about their decisions.

Simon went on to bemoan his current struggles in regards to a series he’s been developing with Ed Burns. While HBO forked over $24 million to let him make The Wire, Simon said the network believes his new project, a period piece about the rise of the CIA, wouldn’t put up sufficient numbers to make it worth the risk.

In a lighter moment, Simon and Willimon exchanged a high-five over the notion that bean-counting can only hinder the creative process. And while Willimon acknowledged that Netflix doesn’t disclose House of Cards’ deliveries, he said he tends to peek at some of the show’s more harsh critical reviews.

"Not as a form of self-punishment, but to look at a very impressive sampling of what people don’t like," Willimon said.

For example, Willimon quickly discovered that many House of Cards viewers were furious that he killed off a dog in the first 30 seconds of the pilot. He added that losing that particular cohort wasn’t a terrible loss, as they clearly were never "meant to watch the show." That said, complaints about narrative ambiguity constituted some of the most constructive feedback.

"You're servicing the story," said Simon, on the role of the writer. "You bring a world on. You feel responsible to the character, and if you look over your shoulder and say the character wants more Omar, more Stringer…that’s why TV was a juvenile medium, for the most part."

For all that, Simon allowed that data could be useful for journalistic endeavors.

On that note, Silver said stats help him ascertain the kind of content that resonates with FiveThirtyEight readers. Timely stories and evergreens are popular. Everything else—for example, a larger story pegged to a recent event—falls in between.