Will Millennials Care About The CW’s ‘Archie’ Reboot? 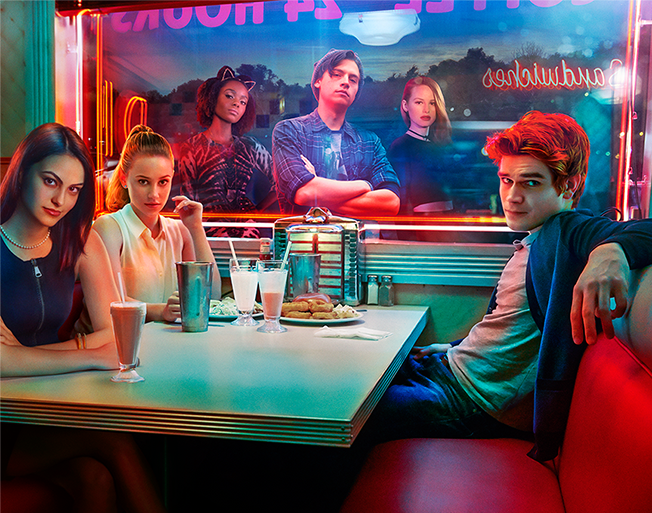 As they try to break through the Peak TV glut and grab viewers, broadcast networks have been relying heavily on new shows based on popular intellectual property (IP), like Lethal Weapon, MacGyver and the upcoming Training Day and Taken. But The CW's new drama Riverdale—based on the Archie Comics characters—offers the season's most intriguing test as to whether IP can truly help launch a show, even if its intended audience will likely have very little knowledge of the source material.

Riverdale, which premieres Jan. 26, finds Archie, Betty, Veronica and Jughead entangled in racy storylines miles from the world of the squeaky-clean comics book, which launched in the '40s. The premiere episode alone features a murder, a hush-hush student/teacher affair and dark secrets galore.

"It's an interesting conundrum: the IP builds awareness, but if you're then changing too much of the DNA, are you risking pushing the audience away?" said executive producer Greg Berlanti, who was intrigued by the opportunity to mine the originality of the characters, which had made the Archie comics so successful. "What was interesting to us was how much can we bring it into a new generation." While The CW's marketing campaigns for its other series based on comic books characters, including Berlanti's shows Arrow, The Flash and Supergirl, relied heavily on consumers' awareness of those characters, its Riverdale campaign doesn't reference Archie at all, aside from a few subtle Easter eggs. "We assumed that everyone we're reaching doesn't know who Archie is," said Rick Haskins, evp, marketing and digital programs. "Thank goodness we have the experience of [former CW hit] Gossip Girl; we know how to do these sexy, gossipy, pop-y things. That's really the playbook we're pulling from: more Gossip Girl than DC Comics."

To that end, as he looked to reach women 18-34, Haskins created five major spots, all featuring popular music. The campaign includes buys on musical.ly (the popular music video social network for tweens and teens), and for the first time ever for a CW show, VOD, to target the millennial audience on their preferred viewing platforms.

Despite the marketing campaign's millennial focus, The CW president Mark Pedowitz argued that the Archie brand does have some value to viewers. "The importance of the IP was it gives you a hook and something to tag it with; it started a dialogue that Archie was coming back," said Pedowitz, adding that The CW's audience isn't as young as one would guess: its linear median age is around 43 (though its digital median age is 20 years younger than that).

He expects at least some old-school Archie fans will be intrigued enough to give Riverdale a try. "If those people tune in and don't like it, at least they checked it out," said Pedowitz. "And if they tune in and like it, it gives this a different flavor." And given that Archie Comics has been given an edgy revamp in recent years, "the current readership will connect what they're reading to the show," said executive producer Sarah Schechter.

Buyers, meanwhile, are less interested in the value of Riverdale's IP than its potential to reach millennial woman (in the vein of Dawson's Creek and Gossip Girl, which defined The CW and its predecessor, The WB), given that the other programs targeting that demo, like Pretty Little Liars, are ending their runs, causing some of those viewers to seek out programming on other platforms. "Much of what they are offering on those other platforms isn't ad-supported, so this is a good contender in that space to speak to people," said Jill Isherwood, vp, associate director of broadcast research at GSD&M.

Ultimately, however, neither the network nor the show's producers are certain whether their Riverdale gamble will pay off. Said Berlanti, "We'll never really know if there's an audience base until we air it."