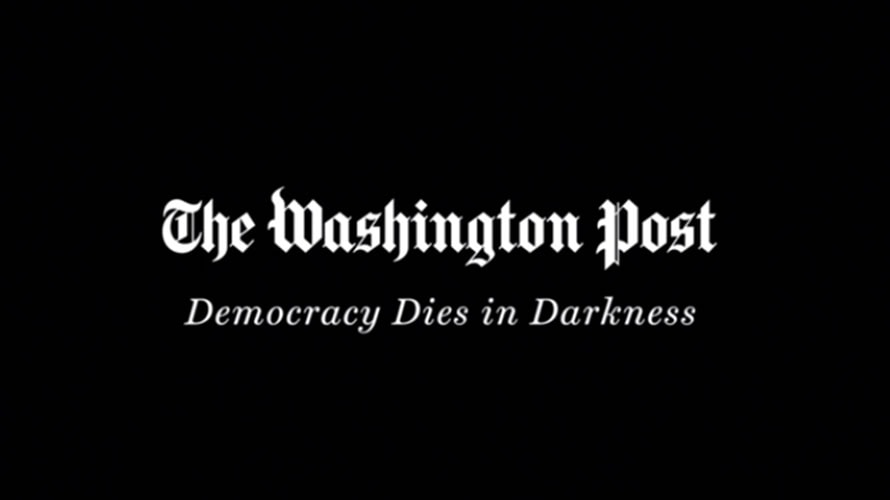 While executives at The Washington Post knew buying the company its first spot in the Super Bowl with less than a week to prepare would be a “risk,” WaPo publisher and CEO Fred Ryan said Monday they’re “thrilled” they decided to go through with it.

The 60-second ad aired in the fourth quarter and highlighted major events, like the Selma March and the moon landing, before showing the names of journalists killed in the line of duty, including WaPo’s own columnist Jamal Khashoggi, who was murdered in October while visiting the Saudi Arabian consulate.

“When we go off to war, when we exercise our rights, when we soar to our greatest heights, when we mourn and pray, when our neighbors are at risk, when our nation is threatened, there’s someone to gather the facts to bring you the story no matter the cost,” said actor Tom Hanks in the spot, who also played Ben Bradlee, the Post’s executive editor in the movie, The Post.

“With an opportunity as big as the Super Bowl approaching, we decided to seize the opportunity to make this a milestone moment in our ongoing campaign,” Ryan said over email via a spokeswoman.

The ad was purchased and produced by The Washington Post, with owner Jeff Bezos encouraging to move forward with it “because he believes in the importance of the message,” Ryan said. WaPo worked with Mark Woollen and Associates on the ad.

Earlier today, Page Six reported that Bezos, who also owns Amazon and Blue Origin, originally bought a $20 million spot for the latter company, but pulled it last minute after a woman he reportedly had an affair with was revealed to have worked on the ad.

A spokeswoman for The Washington Post did not comment on the Page Six report or the allegations in it. Bezos himself took to Twitter on Sunday after the ad aired to say that he was “grateful” for Washington Post reporters.

Amazon had a prominent play in the Big Game, with an ad for its voice technologies and another for its film production arm, Amazon Studios.

Ryan said the time slot WaPo occupied was “available for purchase,” but didn’t elaborate further on what negotiations for the spot looked like. He declined to say how much the ad itself cost.

Media Twitter widely praised the ad, for raising awareness to the work of hardworking journalists. Even Tim Cook, CEO of Apple, gave it praise.

It was, after all, a very expensive advertisement from a newspaper, especially considering that the industry has lost at least 1,000 jobs last month.

Perhaps this is the future of media organizations, which are more and more often led by multi-millionaires or billionaires. To them, a 30-second Super Bowl spot, even at a cost of north of $5 million-plus, is a “drop in the bucket,” said Steven Miller, director of undergraduate studies in journalism and media at Rutgers University.

“One thing the new ownership does for these organizations, it does give them the ability to build their brand that they otherwise couldn’t have done,” said Tim Calkins, clinical professor of marketing at Northwestern University’s Kellogg School of Management. “Partly because these owners want them to be successful. In a way, it’s a very positive sign for the news world.”

It wasn’t such a positive ad for many Washington Post employees, who have long publicly asked for better benefits from their employer in union contracts. As Fredrick Kunkle, co-chair of the Washington-Baltimore News Guild’s bargaining unit at The Washington Post said on Twitter:

1) The Post is now paying, say, $5M/30 seconds to tout journalistic freedom during one of the glitziest and – given the NFL’s knee-taking protests and concussions – more controversial sports events in our country #superbowl #wapostrong

2) While I too am extremely proud of the Post and its legacy, this seems like an especially infuriating expense for a company that has: a) tried to take away health care insurance from part-time employees b) moved everyone toward riskier forms of health insurance #wapostrong

3) c) made it easier to lay people off d) cut their severance e) frozen their pensions and resisted the smallest enhancements to remaining retirement benefits until Sen. Bernie Sanders shamed it into doing so

4) f) refused to add a single day of paid parental leave to its measly four weeks
and g) must know that other media companies, sensing trouble ahead, have been trimming staff #wapostrong

A WaPo spokeswoman did not have a comment on the concerns employees voiced on Twitter last night as the ad ran.

This might not be the last huge marketing Super Bowl push from a news organization, digital or print, especially now that new owners are acquiring titles. In an industry where many believe the product (their news service) to be the most effective marketing tool, new owners—be they millionaires or those from other industries—could be giving this a new perspective.

“It’s consumer products-oriented people taking over management of such companies and saying, ‘Why wouldn’t we do this?’” said Owen Youngman, Knight chair and professor of digital media strategy at Medill.

And you don’t necessarily have to get political; The Washington Post didn’t on Sunday.

“From the start, we set out to make an ad that was as far from politics as possible,” Ryan said. “The message was intended to be unifying and to connect with Americans across the country. The ad went through a number of iterations in a short timeframe, but ultimately, we prioritized keeping the message simple and inclusive.”

Miller agreed that the message was important to keep short. Super Bowl Sunday is not necessarily the time for quality news.