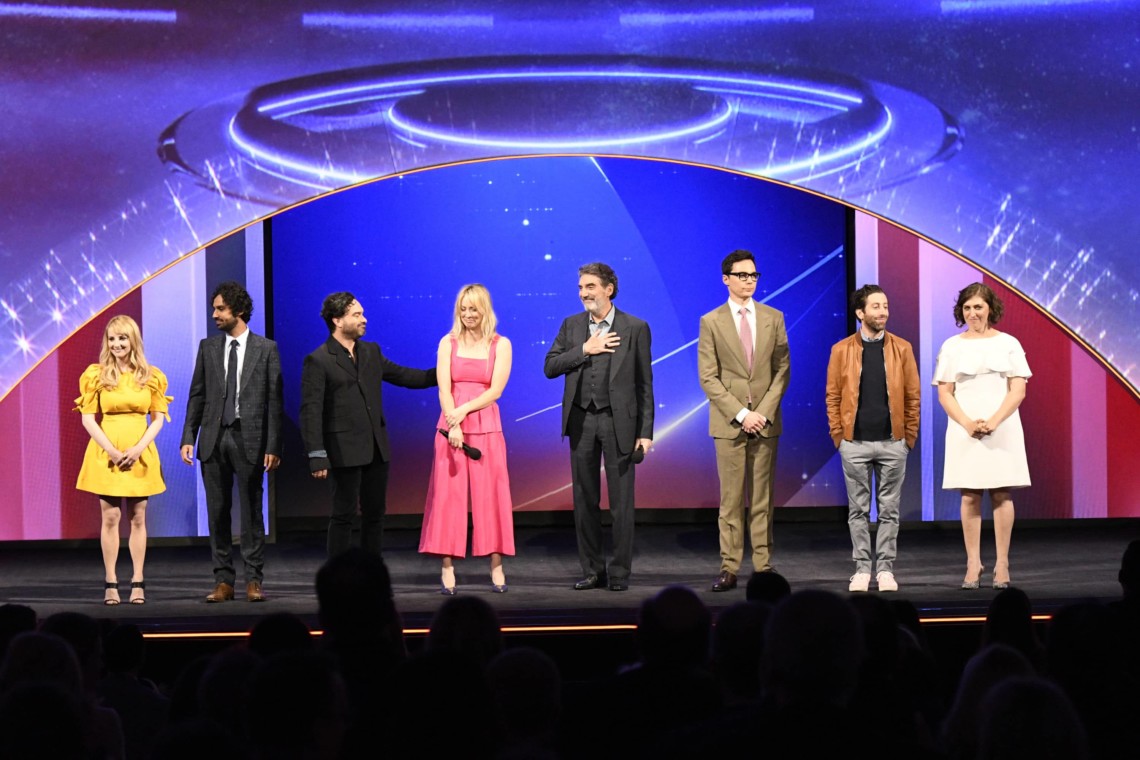 The Big Bang Theory cast was greeted with a standing ovation during its final upfront appearance.
Jeffrey R. Staab/CBS
Share
By Jason Lynch
|
May 15, 2019
Share

After a packed Wednesday that included events from WarnerMedia and CBS, the end of upfronts week is finally in sight. Only The CW’s presentation Thursday morning stands between attendees and the finish line. But before The CW wraps things up, let’s take a look back at the most—and least—surprising moments from Wednesday’s presentations, which included laughs, tears and a standing ovation. (And don’t forget to read our analysis of Monday’s events and Tuesday’s presentations.)

I’m still scratching my head over this one: TBS, which has been cultivating its comedy brand since 2003, is going to begin airing original drama series next year as part of a WarnerMedia initiative to blur the brands of TBS, TNT and truTV. As I wrote, WarnerMedia risks permanently damaging the TBS brand by adding dramas—and is also doing its upcoming streaming service no favors by airing Snowpiercer, based on the 2013 movie, on a comedy network instead of a streaming platform in desperate need of original content to help attract subscribers.

“TBS, TNT and truTV are stronger if we’re less bound by a single brand position or genre,” WarnerMedia’s Kevin Reilly explained to buyers. But cable networks don’t try to be all things to all people the way that streaming services like Netflix do—or even broadcasters these days. So why should a comedy network suddenly branch into other genres?

Perhaps the risky strategy will pay off, but at the moment, WarnerMedia seems to have potentially undone years of effort to craft TBS’ comedy brand.

Tracy Morgan used his time on stage at the WarnerMedia upfront to reminisce about his serious car accident in 2014, when his limo van was struck by a Walmart truck driver, killing his friend comedian James McNair. Morgan received a hefty settlement from Walmart, which he repeatedly referenced.

“Walmart think they done paying me, too. We’ll see,” Morgan informed a theater filled with advertisers, which presumably included Walmart execs or buyers representing the brand. After name-checking Walmart several more times, Morgan said, “Once I got hit by the Walmart truck, I ain’t scared of nothing. The only thing that could destroy me in this world is marrying a Kardashian.”

It’s not every presentation where client-bashing becomes part of a company’s upfront push.

Going into the CBS upfront, I figured it was likely that Stephen Colbert would find a way to  mention former CBS CEO Les Moonves, though I didn’t expect him to joke about the behavior that led to his exit.

But Colbert, perhaps on a high after celebrating his late-night ratings victory onstage, did just that, explaining to the audience that he had been given a stack of research ahead of the presentation about how well CBS performed this year, but that he didn’t have time to get through it all.

“So I just read Bill Barr’s four-page summary. Turns out, Les Moonves: totally exonerated,” said Colbert, adding sheepishly, “I had to do one.”

During an afternoon in which other execs obliquely referenced the company’s recent “wild ride,” it was refreshing to have someone come out and acknowledge the #MeToo-sized elephant in the room.

During most presentations, networks trot out actors from new or returning shows who talk about how “excited” they are to be at the upfront, even though they—and the audience—know that’s not really true. But Walton Goggins, who stars in CBS’ new sitcom The Unicorn, might have been the only person this week to utter those words with complete sincerity, given that he did something rarely seen onstage at an upfront: He started tearing up as he talked about working on a show that was “very, very personal to me; it’s heartfelt.” After spending days hearing stilted upfront dialogue, the moment was a welcome dose of real emotion.

It’s become common for the cast of a long-running show entering its final season to visit the upfront for one last hurrah, as the Modern Family actors did Tuesday at the Disney event. But the Big Bang Theory cast, whose series finale airs Thursday night, made a surprise appearance at CBS’ presentation, even though their upfront attendance is not required given that advertisers can no longer purchase inventory on their show. Buyers appreciated the opportunity to give the show a final standing ovation (only the second full standing O of upfront week, following the reception for the female Olympians at NBCUniversal’s event).

Donna Speciale gets (a little) tough with advertisers

As she promised in her recent interview with Adweek, Donna Speciale made a big push onstage at WarnerMedia’s upfront to get clients on board with its attribution offering, which now uses AT&T set-top-box data, instead of third-party data, and enables her team and marketers to transact on performance-based guarantees—like website traffic or retail visits—instead of the usual Nielsen gender/age demos.

After showing data indicating that the average WarnerMedia strategic audience campaign will result in a 112% return on ad spend compared to an average TV campaign, she asked, “To those of you who doubt the value, what are you waiting for?” It was a tougher sell than buyers had been accustomed to this week, but it was certainly in keeping with Speciale’s efforts in the space.

CBS knows its brand better than any other broadcaster, and it also has perfected its upfront formula. So aside from Stephen Colbert’s Moonves joke and the other emotional moments mentioned above, the company’s event unfolded exactly as you’d expect. Which isn’t to say that it was a retread of previous years, but the company knows how to keep clients entertained (both at Carnegie Hall and the after-party), and it methodically sets out to make that happen.