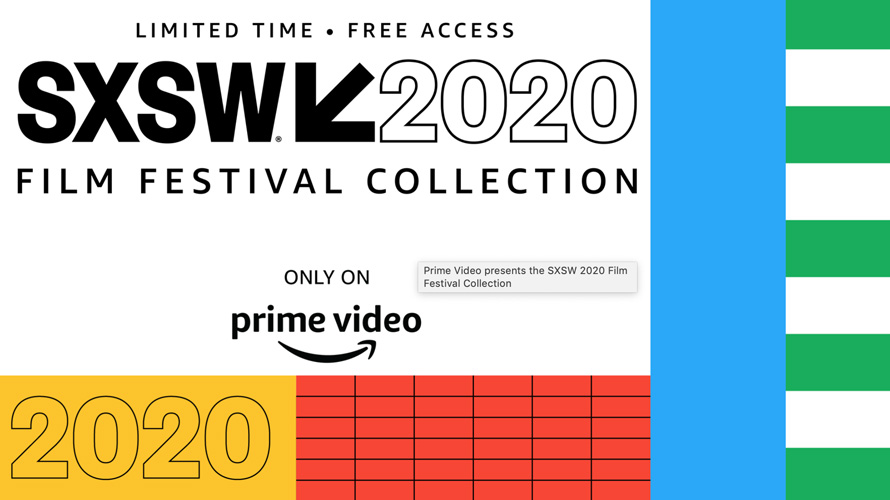 The collection will begin streaming for free on Amazon Prime Video later this month. SXSW

South by Southwest may have been canceled, but the annual festival’s film lineup is heading to Amazon Prime Video—for free.

As part of a partnership between SXSW organizers and Amazon, films that would have initially premiered as part of the 2020 SXSW Film Festival will instead screen digitally on Amazon Prime Video for 10 days beginning later this month. The “online film festival” will showcase the films for free for all viewers, even those without a Prime subscription.

“Ever since SXSW was canceled by the city of Austin, we’ve been focused on how we could help the incredible films and filmmakers in the SXSW 2020 Film Festival lineup,” said Janet Pierson, SXSW’s director of film, in a statement. “We were delighted when Amazon Prime Video offered to host an online film festival, and jumped at the opportunity to connect their audiences to our filmmakers. We’re inspired by the adaptability and resilience of the film community as it searches for creative solutions in this unprecedented crisis.”

Filmmakers don’t have to participate, and they must opt-in to make their films available to screen digitally. Those who do participate will receive a screening fee from Amazon, the sum of which was not disclosed. (Amazon did not immediately return a request for additional information.)

“We’re honored to be able to provide a space for SXSW filmmakers to share their hard work and passion with audiences for the first time,” Amazon Studios head Jennifer Salke said in a statement. “It’s been a privilege collaborating with Janet Pierson and the SXSW team to bring these diverse and inspiring films to viewers around the country. We are supporters of SXSW and other independent film festivals, and hope this online film festival can help give back some of that experience, and showcase artists and films that audiences might otherwise not have had the chance to see.”

The online film festival will kick off later this month, though Amazon hasn’t yet announced the exact dates.

SXSW, normally a tentpole annual event for the media, music and film industries, was canceled in early March amid growing concerns about the spread of COVID-19, which has since been declared a pandemic and prompted more widespread shutdowns around the country and globe.

The cancellation left some entertainment companies scrambling to find other ways to promote their programming and films; some filmmakers have made digital screeners available to members of the press in order to draw attention to films that in more usual circumstances would have the benefit of glitzy in-person premieres and parties.

Film festivals like SXSW’s are crucial for filmmakers without the luxury of the widespread theatrical release normal for studio movies. (Festivals also give distributors the chance to screen films and decide which ones they may want to pursue.) The ongoing spread of COVID-19 has had a major effect on those events around the world, delaying other festivals including the 2020 Cannes Film Festival and the 2020 Tribeca Film Festival.

Commercial films have faced their own disruption due to the new coronavirus, with several distributors delaying the release of major titles and others making their theatrical releases available much sooner than normal for digital rental or purchase.