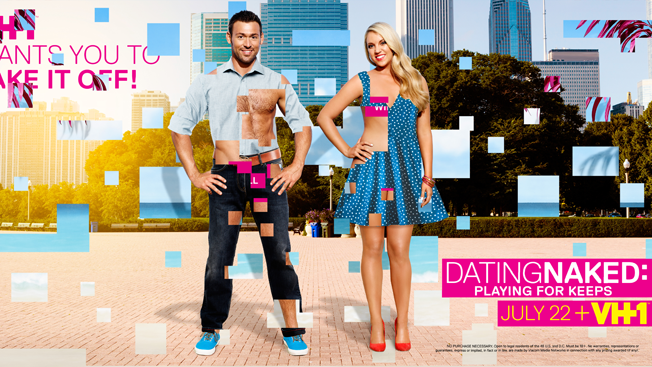 In a development as predictable as Emmy voters snubbing The Americans again this year, the Parents Television Council has announced that it is really, really upset about the interactive Dating Naked billboard VH1 is unveiling Friday in Los Angeles, at the corner of Hollywood Boulevard and Highland Avenue.

The sign will initially feature a tame image of Chris Aldrich and Kerri Cipriani, two suitors on the nude dating show this season, fully clothed. But throughout the day, passersby will be encouraged "strip" down the poster, peeling away tabs to reveal a naked image (with some strategically placed color boxes) of the duo underneath.

"The provocative and titillating billboard is less than two blocks from Hollywood High School and at the very intersection that serves as ground zero for millions of Hollywood tourists," said Parents Television Council president Tim Winter in a statement. "Children are nothing more than collateral damage in the network's desperate attempt to put lipstick on the Dating Naked pig."

Winter also asked VH1's parent company, Viacom, to step in if the network won't take action. "Viacom recently demonstrated its understanding of the impact television programming can have on children when it yanked the confederate battle flag from its air," said Winter, referring to TV Land's decision two weeks ago to pull Dukes of Hazzard reruns. "Yet VH1 knowingly promotes its most explicit content to children."

VH1 had no comment on the PTC's claims, but in an earlier interview, Caralene Robinson, evp, marketing, acknowledged "the pros and cons" of promoting a nude-themed show like Dating Naked, which returns for its second season on July 22. "For our marketing campaign last year, there were channels that wouldn't take our ads, so we frequently run into those kinds of issues," she said.

"At the same time, it's such a phenomenon, and such a viral subject, that a lot of that stuff that we do usually gets press, and it does a lot of the heavy lifting for us," she added. "It's a pro and a con, but either way, awareness levels of our upcoming premiere are matching last year's levels. So people know about it, and people are talking about it." Even more so now that the Parents Television Council is involved.