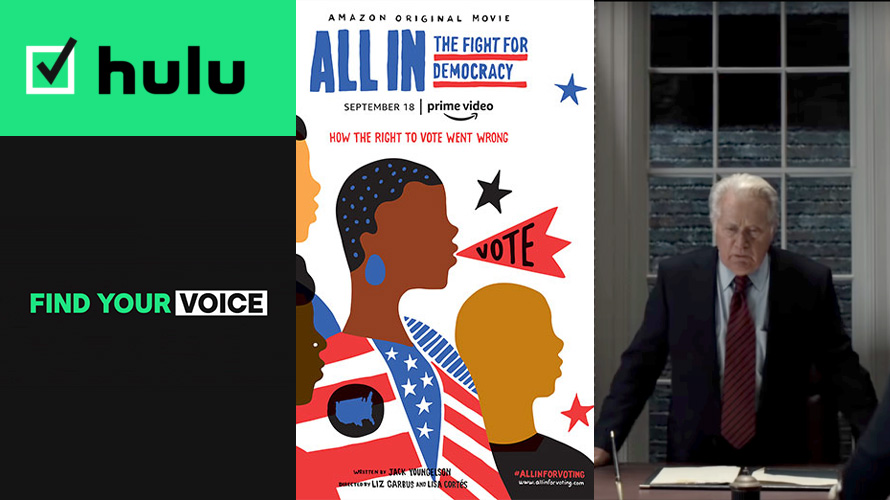 Last Thursday night, a huge political face-off went down on broadcast television: dueling presidential candidate town halls, with former Vice President Joe Biden appearing on ABC at the same time that President Donald Trump was featured on NBC. But even as those programs aired, new streamer HBO Max was debuting its own politically adjacent program for subscribers.

The show, a West Wing reunion special filmed this fall with members of the original cast, arrived on the streamer not just to satiate fans of the beloved series but to financially benefit the voter registration and engagement nonprofit When We All Vote with a donation from WarnerMedia. HBO Max head of original content Sarah Aubrey said when the special was announced that the program was designed both to entertain and “help ensure the organization can carry forth its mission to increase voter participation in every election.” (The exact amount of the donation was not disclosed.)

HBO Max isn’t the only streamer looking to align itself with surging interest in politics and an upcoming high-stakes election. Just two weeks from Nov. 3, streamers old and new have scooped up timely programming and are pushing voter engagement initiatives on their services, which serves both to brand-build and help satiate subscribers’ growing interest in news and political programming.

“People want to be informed, both locally and at a national level, more so than ever,” said Mark Rotblat, the chief revenue officer of Fox-owned free streamer Tubi, which moved to make available live local and national news programming from Fox affiliates as of Oct. 8. “We wanted to be able to capture some of that consumer behavior, that viewer behavior, before it might start to come down.”

Approaches vary from making programming moves to driving voter engagement initiatives. Some services have managed to do both: Amazon Prime Video’s documentary film All In: The Fight for Democracy, which focuses on voter suppression in the U.S. and debuted on Sept. 18, rolled out with a considerable marketing campaign this fall that included a voter registration campaign, voter education initiatives and a bus tour that brought socially distant screenings of the documentary to areas around the country with below-average voter turnout.

Like HBO Max, there was also a financial component: Amazon Studios gave grants to local voter registration organizations around the country as part of the film’s promotion and related initiatives.

Hulu is also encouraging its users to vote with a partnership with Rock the Vote. A Hulu-branded voter registration hub and a partnership with newsletter publisher theSkimm is bringing voting information and get-out-the-vote messaging to users on various digital platforms.

Josie Brown, Hulu’s director of brand marketing, said the partnerships “were natural fits” for the streamer as it looks to position itself as a streaming destination for the election. (There’s also an acquisition component: Totally Under Control, a buzzy documentary about the Trump administration’s handling of the Covid-19 pandemic, lands on the streamer Tuesday.)

“We know that nearly 50% of Hulu’s ad-supported viewers are cord-cutters or cord-nevers, and with the presidential election approaching, access to election-related content is more critical than ever,” Brown said. “We’ve also seen a 50% increase in news consumption since the beginning of the year—so we knew our subscribers were hungry for news content.”

Streamers are also pursuing live news programming, even as it stands in stark contrast to their broader libraries of on-demand offerings. Both Tubi and Hulu have opted to build out live news options, with Hulu making presidential debates and election night coverage available to all subscribers, not just those who subscribe to Hulu’s Live TV tier. News on Tubi offers up access to 17 Fox Television stations’ programming and more than two dozen news partners that also include NBC News and Bloomberg TV, with plans to expand that live offering further, Rotblat said.