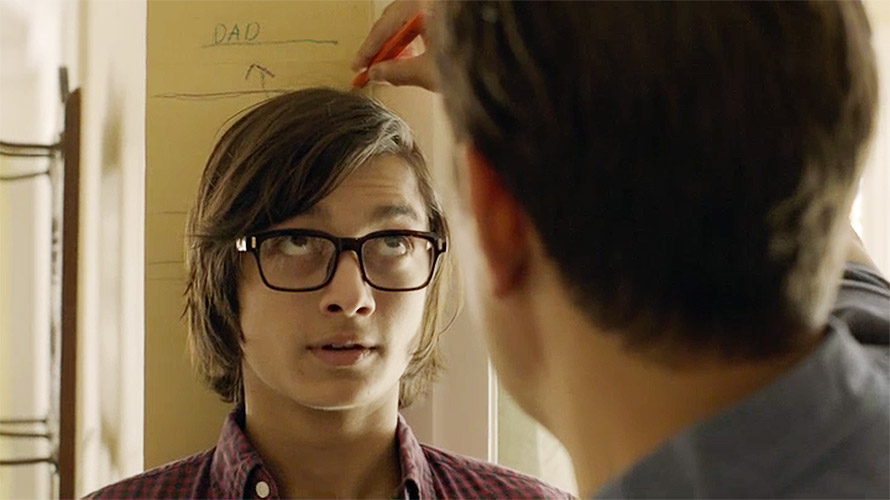 This Is Us fans are used to the show’s technique of juggling storylines in various time periods, but starting with tonight’s episode, the time jumps won’t stop when the show goes to an ad break.

NBC and State Farm are kicking off a multiplatform campaign centered around This Is Us, which includes three 30-second spots that were shot in the style of the hit drama, with the flashback and flashforward devices, and the acoustic-guitar-centric soundtrack, that are a staple of each episode.

The plan is to air a different spot, beginning tonight, for three consecutive episodes, said Mark Marshall, evp of NBCUniversal’s entertainment sales group, who added that one of the spots “may” also pop up in This Is Us’ post-Super Bowl episode on Feb. 4.

Tonight’s spot, called “Height Markings,” focuses on a family that has measured the height of its kids against a wall in their home over several years.

One of the other spots focuses on a different family, tracing a string of pearls that is passed along to various members.

Last season’s breakout hit has continued its momentum in Season 2, where This Is Us is now the No. 2 broadcast show among adults 18-49 in Nielsen’s “most current” metric, averaging a 5.1 rating that is behind only Sunday Night Football. Tonight’s episode marks the show’s return after beginning its midseason hiatus Nov. 28.

Versions of the State Farm spots will appear on NBC’s digital and social platforms, and the campaign also incorporates NBCUniversal’s digital partners Vox Media and BuzzFeed.

Like longtime sponsor TJ Maxx, the State Farm spots are also shot in the style of the show because of the “emotional connections” that viewers have with the series, said Marshall. NBCU’s ad sales team has been searching for partners that could create This Is Us-related content with “contextual relevance … that borrows from that great storytelling of This Is Us, and ties it into the right brand.”

Marshall said as soon as he saw the pilot last year, he thought State Farm would be an ideal fit for such a collaboration. “Not a lot of people think of insurance as an emotional purchase, but it really is. Once you have children and you’re insuring your home and insuring your life, those are emotional decisions to take care of your family,” Marshall said.

This Is Us “is about real-life and real issues that people face, both triumphs and tragedies. And that is what State Farm has always been about: being there for you during your good times and your worst times, and helping things go right, as best as possible,” said Ed Gold, advertising director, State Farm.

The show’s emotional connection with audiences means that a campaign like this can particularly resonate. “Emotions play such a big part of why consumers watch shows and why they purchase products. The more opportunities we can get to align that right emotional messaging in the show with the right messaging in the ads, the more successful the brands will be overall,” said Marshall.

The campaign includes a social activation in which NBC and State Farm will ask This Is Us fans to submit photos of special items that are meaningful to their own family, using a co-branded hashtag. This Is Us’ Twitter handle will lead the charge by posting photos of similar items from the show’s Pearson family.

“Sometimes it is the little things or a precious item that brings you back to a time in your life that you remember, for either the good or the bad. The campaign we created with NBC and This is Us focuses on those similar things,” said Gold. “In some cases it might be a strand of pearls that your mom handed down to you, or the markings on a wall that show the passing of time and your kids growing up. These are things we can all relate to.”

This is the broadest campaign yet for a This Is Us brand partner, said Marshall, as it also leverages NBCU’s digital partnerships with BuzzFeed and Vox Media.

BuzzFeed will amplify the spots through its new BuzzCuts format, which creates meme-like cutdowns of spots. The company will also create four custom content posts for State Farm, which will tie back to This Is Us.

Meanwhile, Vox Media will create a branded story featuring both This Is Us and State Farm, which will appear on its Vox and Curbed sites.

The broader campaign not only increases reach for State Farm’s messaging, but also “allows us to further engage the fans of the show and to better link our brand to the show they love,” said Gold.

The State Farm partnership grew out of NBCUniversal’s aggressive upfront strategy for This Is Us’ second season. “If there are any shows that can challenge legacy—and for our advertising partners to stay with on every distribution platform—it’s SNL and This Is Us,” NBCUniversal ad sales chief Linda Yaccarino told Adweek last summer.