As some mock the poster's design, more take issue with Gwyneth Paltrow's 'pseudoscience' 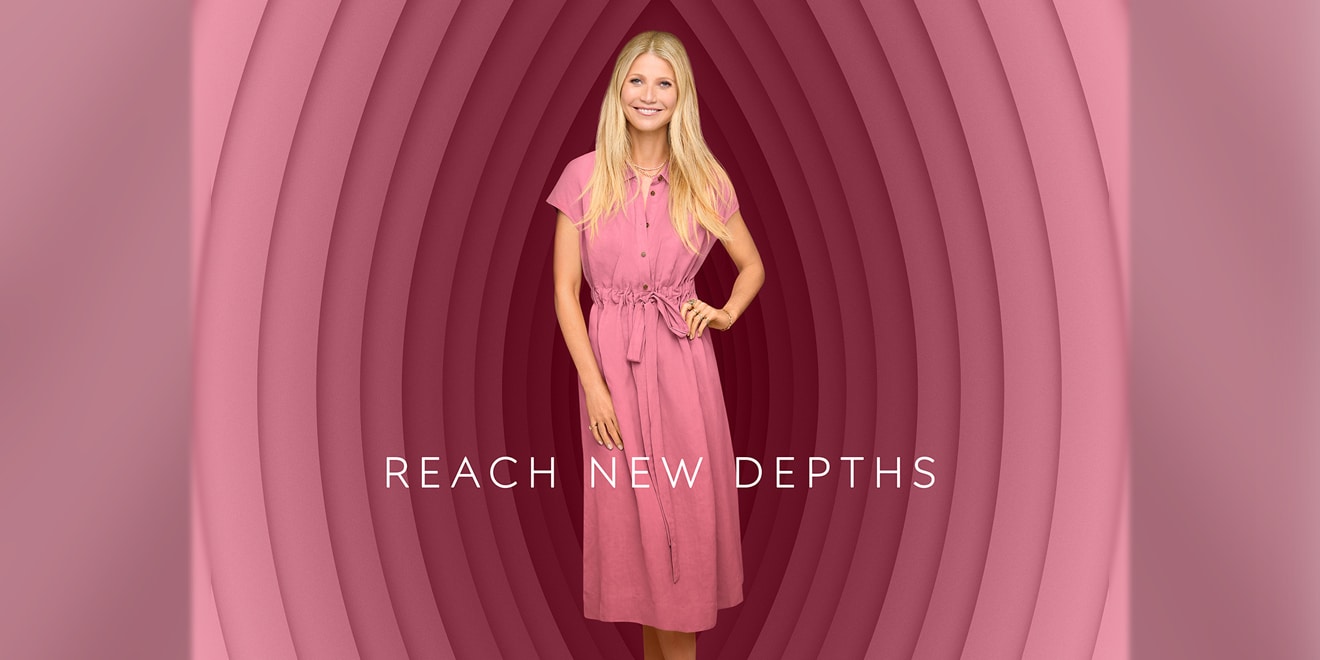 Paltrow has been emboldened by critics of Goop, especially when it comes to controversial vaginal products and treatments.
Netflix
Share
By David Griner
|
January 6, 2020
Share

Netflix just unveiled the poster for its new series that extends Gwyneth Paltrow’s Goop empire, and it’s already proving to be one of the most polarizing pieces of streaming marketing in years.

There is, to be clear, a lot going on here. Many are simply mocking the poster’s far-from-subtle design approach of showing Paltrow, in pink, standing in the concentric folds of a descending cat’s-eye pattern. Any doubt about whether it’s meant to convey a vulva is doused by the “Reach new depths” tagline.

This paired with the show’s title—The Goop Lab—coalesces to form a piece of marketing that’s generally been received by Twitter with the crowd equivalent of Chrissy Teigen grimacing.

#Netflix, you should consciously decouple from that poster.

DESCRIPTION: "in gwyneth paltrow's new show, she is shrunk down like a blonde Miss Frizzle in the Magic School Bus, and every episode goes into a different vagina to leave jade eggs, crystals, and healing energies"

that's the impression i'm getting from this poster

Beyond the poster’s design, however, the weightier backlash is targeting the show’s entire premise as an amplifier of Paltrow’s Goop lifestyle brand. When news of the show’s development broke last year, Guardian health columnist Arwa Mahdawi called it “a dangerous win for pseudoscience.”

At issue is Goop’s embrace of unproven wellness tools and techniques, such as jade vagina eggs, for which the brand was fined $145,000 in California over allegations of “‘unsubstantiated’ marketing claims that weren’t backed by science. Goop has also played up colonics, vagina steaming and other practices health professionals have advised against.

No. We don’t need snakeoil and health wuwu disinformation given a platform because it’s peddled by a celebrity. Do better. #HealthLiteracy #ScienceRules

I wonder what wonders of modern medicine we will find in the goop lab? pic.twitter.com/e9g6vDXJFi

Yay, I love encouraging and promoting pseudoscience in a time when parents are increasingly endangering their children by listening to influencers over doctors ????????

As of this writing, the tweet hasn’t technically been ratioed—meaning replies have not outpaced likes, typically a sign of a culturally radioactive tweet—but it could still get there. The tweet by Netflix’s @SeeWhatsNext account had about 650 replies and 1,100 likes two hours after posting.

Paltrow has been unfazed by—and has even become emboldened and enriched by—her critics. Here’s how a New York Times Magazine profile summarized her philosophy on vagina-centric backlash to Goop:

Each of these pronouncements set off a series of blog posts and articles and tweets that linked directly to the site, driving up traffic. At Harvard, G.P. called these moments “cultural firestorms.” “I can monetize those eyeballs,” she told the students. Goop had learned to do a special kind of dark art: to corral the vitriol of the internet and the ever-present shall we call it cultural ambivalence about G.P. herself and turn them into cash. It’s never clickbait, she told the class. “It’s a cultural firestorm when it’s about a woman’s vagina.” The room was silent. She then cupped her hands around her mouth and yelled, “VAGINA! VAGINA! VAGINA!” as if she were yodeling.

Thus the focus of the poster.

The show’s trailer also drives home the connection between Netflix’s The Goop Lab and vulvas. Among other topics, it highlights segments on orgasms, insecurity and vaginal pride. And, of course, there are more divisive examples of what the streaming service calls “boundary-pushing wellness topics,” including energy healing and psychics.

More so even than the poster, the trailer has proven divisive too. A few hours after being posted on YouTube, it had twice as many thumbs down as thumbs up.