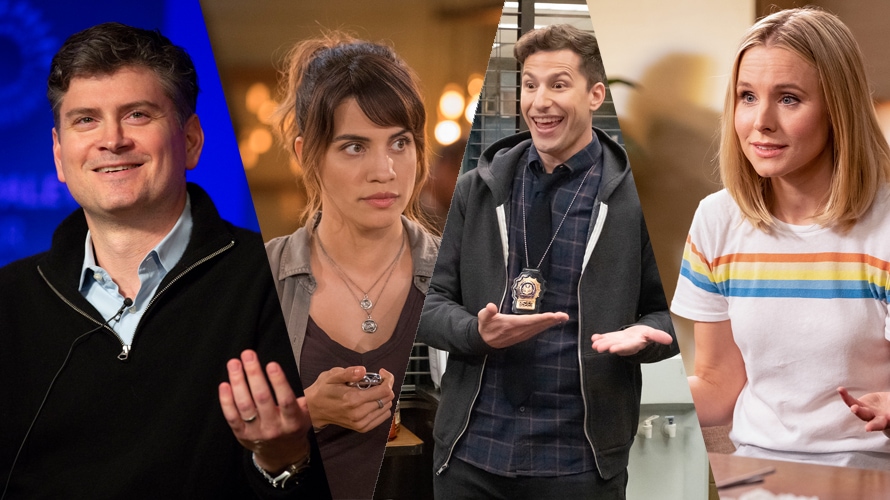 In the past two years, several of broadcast TV’s top creators—including Shonda Rhimes, Ryan Murphy and Kenya Barris—have been lured to streaming services like Netflix with lucrative new deals.

Others, however, have continued to thrive on broadcast TV. One of those is Mike Schur, who’s now executive producing three NBC comedies: The Good Place (one of Adweek’s best shows of 2018), Brooklyn Nine-Nine (which moved to NBC last year after Fox canceled it) and now Abby’s, which premieres tonight. Abby’s—about a San Diego neighborhood bar that Abby (Natalie Morales) runs out of her backyard—is the first multicamera show to shoot outdoors in front of a live studio audience.

Those could be joined by a fourth show next season, as NBC has ordered a Schur-produced pilot starring Kal Penn. (Schur has also dabbled in streaming, executive producing Netflix’s Master of None.) Earlier this month, Schur—who previously co-created Parks and Recreation and worked as a writer on The Office—landed his own nine-figure deal as he extended his Universal Television pact for another five years, cementing his status as NBC’s comedy MVP.

Ahead of Abby’s debut, Schur spoke with Adweek about his continued love of broadcast TV, the inevitable Abby’s/Cheers comparisons and why he is “so in awe” of Shonda Rhimes.

Adweek: Why do you still believe so much in broadcast while so many others have thrown in the towel?
Schur: There are a lot of reasons. No. 1: they’ve been very nice to me. [laughs] They put a lot of my TV shows on the air. But it’s more than that. Comedy needs obstacles. In fact, all art needs obstacles. You can think of many situations where a small, indie movie was made. And they made a couple sequels, and the sequels had quadruple the budget and notes were given, and the sequels stank. Like The Matrix, for example. The first Matrix is an all-time classic, and then they were like, “Here’s $500 million and you can do whatever you want.” I watched those [sequels], just dumbfounded.

With broadcast, it’s annoying, don’t get me wrong, but they give you obstacles. You have to hone everything down to 21 minutes and 30 seconds, and you have to write act breaks, and the story has to have real structure, and you have to cut away everything that isn’t the best, core chunk of the filet of the episode. And there are many, many times—in fact, I would venture to say every single episode of any show I’ve ever edited in my life, with like two exceptions—where I’ve been like, “Man, I wish I had another 30 seconds, 45 seconds, minute-and-a-half, seven minutes…” It’s a pain in the butt to not have that, and I am envious all the time of the ability to expand and contract the way that you can on streaming.

"I sometimes watch comedy shows on streaming and it’s like, no one edited this. They aired everything they shot. So my fear is that it makes you lazy as a writer, as an editor."
-Mike Schur on why he still believes in broadcast

But all things being equal, I sometimes watch comedy shows on streaming and it’s like, no one edited this. They aired everything they shot. So my fear is that it makes you lazy as a writer, as an editor. Now, there are also a lot of great, funny TV shows on streaming that are honed. [Tina Fey and Robert Carlock’s Unbreakable] Kimmy Schmidt has a higher joke-per-second ratio than any show since their last show [30 Rock]. So it’s not a virus that affects everybody. But I like the obstacles that broadcast gives you.

In every interview about Abby’s, people bring up Cheers. Given how much you love that show, was there any part of you that thought, maybe we should make this about a backyard yoga studio instead?
First of all, the fact that everyone wants to talk about Cheers all the time is good for me. That’s all I want to do. But from the second [creator] Josh [Malmouth] pitched it, it was never anything but a bar; it never crossed my mind. It’s a multicam show set at a bar; we’re going to talk about Cheers. If this show is a success and it lasts for however many years it lasts for, we’ll be talking about Cheers in the finale. People will be asking if the finale is going to be like the Cheers finale. And that’s okay. I think we would be morons if we didn’t realize it was going to happen, but I also think we would have been morons if we had changed what was a good idea because we were worried about that. Who cares? I’m always happy to talk about Cheers.