This year’s upfront market ended up being far healthier across the board than many had anticipated. Yet no sector was stronger than data-based advertising, which uses data sets from buyers or marketers to target audiences outside of Nielsen’s traditional age and gender demos that make up the C3 and C7 currency. All of the companies with robust data offerings—including NBCUniversal, Turner, Fox Networks Group and Viacom—saw substantial increases in their data-based transactions. Fox’s upfront included 40 percent gains in offerings like its Audience Insights Manager, while Turner doubled its upfront revenue commitments for its Audience Now platform. “To me, that means that we’re not just in testing mode anymore,” says Turner Ad Sales president Donna Speciale. “It’s becoming part of their media mix.”

After years of talking a big game about data, media companies and buyers are finally getting serious about actually conducting business using audience targeting. In March, Linda Yaccarino, NBCUniversal’s chairman of advertising sales and client partnerships, was so confident in her company’s data offerings via its Audience Studio that she publicly committed to transacting a billion dollars of advertising business this year (one-tenth of NBCUniversal’s annual ad revenue) on the platform. The announcement “was really about a demonstration of the size and the breadth of our company,” says Yaccarino, who tripled her upfront business this year in data-based advertising. “That’s the biggest growth area of our entire company.”

But the biggest industry jolt to data-based advertising should come with the launch of OpenAP, which Turner, Fox and Viacom jointly created earlier this year to provide an industry-wide audience targeting platform standard for buyers, allowing them to standardize their target segments rather than recreating them separately for each company. The platform’s beta launch is set for next month, and once those results are able to be shared, “you’re going to start seeing a lot more hand-raisers,” says Speciale. “That’s what a lot of clients have been waiting for.”

While custom targeting has been available in some form for more than six years, over the past couple years, “it has ramped up significantly as data has gotten better and better, and as the media sales community has been more comfortable with allowing their inventory to be purchased that way,” says David Cohen, president, North America, Magna Global.

Data-based and audience-targeted advertising was an early draw for “high-ticket items where there was a great ability to close the loop in terms of sales,” such as automotive, says Cohen. That has expanded to categories with “really good, granular data that allows us to prove the efficacy,” including consumer packaged goods, pharmaceuticals (which relies on healthcare data analytics from Crossix), financial services and entertainment. In general, audience targeting is more ideally suited “if you have a focused consumer or more of a niche market” than a broad-based one, says Lyle Schwartz, president of investment, North America, GroupM.

For years, Magna Global has been using its custom data stack “to identify what we call diamonds in the rough: things that the market as a whole doesn’t believe to be valuable, but we have used data to illuminate that it is,” says Cohen. Yet it can become tougher to find those diamonds in the rough now that there are so many more parties looking for them, too. That’s why Schwartz is expanding his search. “So while they’re focusing in on the linear feed, I’m trying to add in a focus on alternate delivery devices, too,” he explains.

Like Magna Global, GroupM continues to rely on its own data sets, as Schwartz is wary of tipping off the networks to their findings. That could cause them to inflate pricing, which would then reduce the value of their efforts. However, “we are very interested in some of the databases and some of the data-enhanced approaches that the networks are opening up to us, as we can marry our data with it. So there’s more and more conversations about how we might use this to further refine or validate the power of video,” Schwartz adds.

This year’s newest wave of data offerings from the networks include third-party guarantees—Fox and NBCUniversal are incorporating Moat’s Video Score in their transactions—which are also giving buyers more confidence about audience targeting. “One of the big concerns you always have is not having that understanding of what really did happen,” says Schwartz. “You have models and projections, and with something like a Moat I can actually see certain types of performances. Now, it may not be the performances or the metrics I want eventually, but it’s a nice start.”

As digital advertising continues to struggle with brand safety, fraud and viewability concerns, linear networks are touting their audience-targeting capabilities as a good alternative to combine the digital targeting with linear scale. “The way advertisers think about it today is Facebook and YouTube have great data, but TV still has the best attention. Now we can start bringing some of the great data that some of these digital companies have—and actually have someone actually watching the ads,” says David Levy, evp, nonlinear revenue, Fox Networks Group.

Some of this year’s new data offerings give clients faster insights than ever before. “I think a lot of advertisers are looking at the way that we look at attribution on campaigns today, and I think they agree that measuring the success of a campaign on the cost and reach is not an effective way to actually know if your campaign is working,” says Levy.

In May, Fox introduced Up//Lift, a brand-lift optimization system that uses sentiment data and machine-learning algorithms, and that could help brands target their creative in the second game of a football doubleheader based on data from the spots that aired in the first game. “We’re going to move to a place where you don’t necessarily have to guess the exact right audience segment,” predicts Levy. “You can actually use data to tell you what’s the right audience and what’s the right message for that audience at the right time.”

The upfront surge in data-based advertising bodes well for the scatter market, where more of the audience-targeting deals occur. “They tend to get committed closer to the air date, because they’re so brand focused that they want to be a bit more honed in on what they’re focusing on in those quarters,” says Speciale.

Also, the macro nature of the upfront market “is not necessarily conducive to getting a lot of the details around how the buys will actually execute,” says Levy. “The initial negotiations maybe don’t take into account all the capabilities that they can take advantage of. What we’re starting to see in the planning phase, which is what we’re in now, agencies and clients are really digging in to learn more about how they can take full advantage of all of the data we have in order to make their campaigns more successful.”

While audience-targeted advertising is on the rise, at this point it’s still “an additive as opposed to a replacement,” cautions Cohen, who estimates that “95 percent-plus” of business is still transacted via traditional metrics.

Still, buyers are looking forward to a time, which is probably still several years in the future, in which Nielsen and data-based metrics merge into “a single currency that allows us to plan, buy, measure, post and report on a single audience,” says Cohen.

Agrees Schwartz: “Eventually I believe we’re really going to get to a total video marketplace, which is national and local as well as alternate delivery devices or video. And that’s when it really becomes fun.”

OpenAP is ready to launch

Data-based advertising continues to gain traction, but the arrival of OpenAP represents its biggest opportunity yet for industry-wide adoption of non-Nielsen-based transactions. Until now, the hesitation for many brands to embrace data-based advertising “was that it just hasn’t been scalable enough, that there’s just more one-offs,” says Speciale. But OpenAP will allow clients to standardize their audience segments for three of the industry’s biggest data offerings: Fox Networks Group’s Audience Insights Manager (AIM), Turner’s Audience Now and Viacom Vantage.

“What’s helping to bring brands on board is standardization in the industry around how to transact,” says Fox’s Levy. “A lot of the traction that we’ve found in the upfront around linear optimized campaigns was around the standardization that we’re pushing for with OpenAP.” Magna Global’s Cohen calls OpenAP “a brilliant idea,” but notes that until the beta begins, “we’re operating conceptually.”

As the platform prepares to launch, it could soon be joined by the industry’s other biggest data offering, NBCUniversal’s Audience Studio. In this week’s cover story,  Yaccarino says she is considering coming on board, explaining, “It would make all the sense in the world for such a big swath of the inventory availability in the marketplace to be part of OpenAP.” 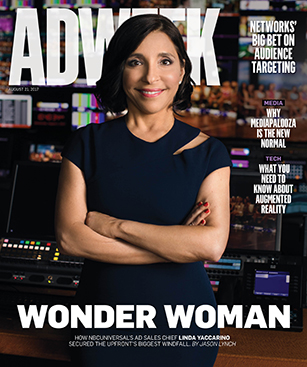