Inside the Broadcast Network Battle Over American Idol’s Revival

Things are getting heated between ABC, NBC, CBS and Fox 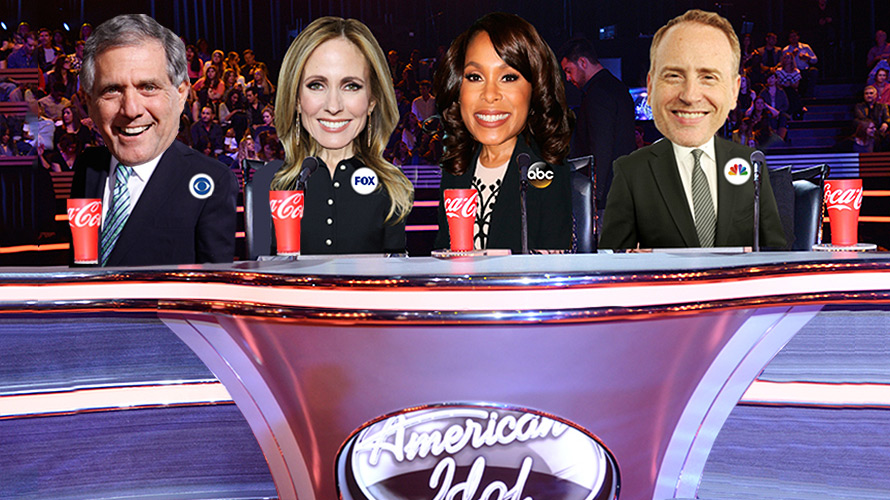 The broadcast networks have mostly been leaving one another alone during upfront week, instead directing their vitriol toward a common enemy—digital advertising, which both NBCUniversal and Fox blasted on Monday. But when it comes to one particular hot-button issue—ABC’s upcoming revival of American Idol, which aired on Fox for 15 seasons—the gloves have come off.

This week, as they discussed their new fall schedules with reporters, execs at ABC, Fox, NBC and CBS explained and defended their decisions to pass on, or pick up, the revival, which went off the air just one year ago, and question their rivals’ moves.

ABC Entertainment president Channing Dungey threw the first punch last week, when her network announced that it had closed a deal with producers FremantleMedia North America and 19 Entertainment to revive American Idol for next season. In her statement about landing the series, she questioned Fox’s decision to end the show last year, calling American Idol “a pop-culture staple that left the air too soon.”

NBC, which was in discussions about picking up the show earlier this year, countered ABC’s announcement last week by quickly letting the world know that it had signed a pair of Idol alums rumored for judging slots on the revival, Jennifer Hudson and Kelly Clarkson, to be Voice coaches. Hudson will appear in Season 13 this fall, while Clarkson will participate in Season 14 in the spring.

"We did not see the fan excitement and enthusiasm for that show to come back that Fremantle did. We just had a different set of facts."
Dana Walden, chairman and CEO, Fox Television Group

But NBC claims they weren’t countering ABC’s Idol announcement, despite the fact that both deals were revealed within 48 hours. “We’ve been talking with them for a long time about joining The Voice,” said Paul Telegdy, president, alternative and reality group, NBC Entertainment. He pointed out that Hudson is already a coach on The Voice’s U.K. version, while Clarkson “has appeared many times” on The Voice.

“We did have conversations with them about Idol, and we recognize the franchise is a great name and a great title,” said NBC Entertainment chairman Robert Greenblatt, whose network already has deals with two of Idol’s most popular judges: Simon Cowell and Jennifer Lopez. Ultimately, he said, between The Voice and other music competition shows in development that could air as soon as next summer, the network decided “we just didn’t need Idol.” Added Telegdy, “also, the audience hadn’t told us there was a compelling reason to bring it back, either.”

That sentiment was echoed by Fox Television Group chairman and CEO Dana Walden, who said that “we felt it was too early to bring the show back, and all of our research and all of our fan forums supported that notion. We did not see the fan excitement and enthusiasm for that show to come back that Fremantle did. We just had a different set of facts.”

Still, seeing one of its biggest hits air on another network after 15 seasons is “obviously a tough one for us. It’s so connected to the Fox brand,” said Walden, who was unusually frank with reporters about the process through which Fox considered—and ultimately rejected—the idea to revive the show.

Within a month or two after American Idol’s finale last spring, Fox met with FremantleMedia North America, which was “determined to get this show back on the air as quickly as possible,” said Walden. But Fox, which spent $25 million to market what it called the final season, felt “like it would be extremely fraudulent to bring the show back quickly,” she said.

"The price is so expensive, you need a 35 share to break even. So that’s not going to happen."
Leslie Moonves, CBS Corp. chairman and CEO

Before deciding that Season 15 would be Idol’s last, Fox spoke with FremantleMedia “about the fact that the ratings over the four years prior to the final season had dropped almost 70 percent” and the network was “losing an enormous amount of money,” said Walden.