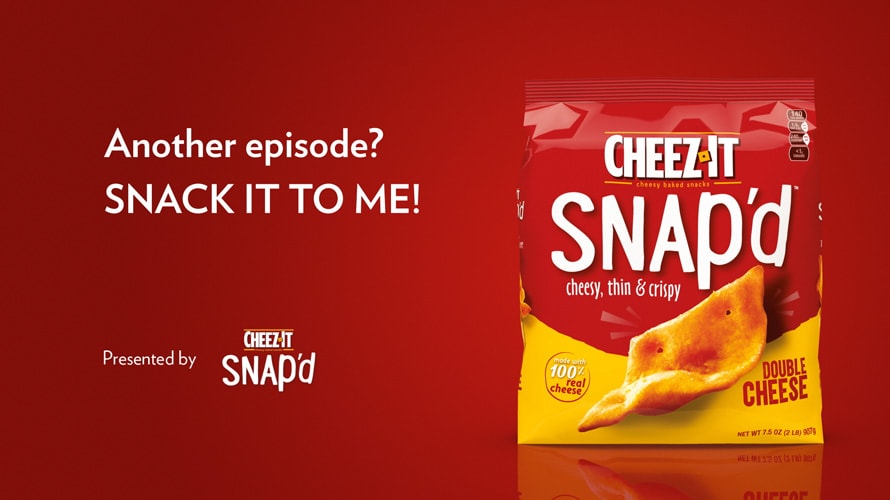 Kellogg’s Cheez-It is one of three brands that have signed on to test out the new ad format. Hulu

At its upfront presentation in May, Hulu said it will be rolling out a new ad format tailored to viewers binge-watching several episodes of a show in a row. Seven months later—and two weeks before millions of people around the country will have time off work for the holidays and likely spend some of it binge-watching—the ad format is finally live on the platform as of today.

Hulu has partnered with Publicis Media as the launch agency partner of the format, and Kellogg’s Cheez-It crackers, Maker’s Mark bourbon and Georgia-Pacific’s Sparkle paper towels will be the first brands to test out the new ad unit, according to the streaming service. The ads will only appear for subscribers of Hulu’s ad-supported tier.

The format is made up of three ads that run over the duration of three episodes. The first ad will appear during the last ad break of the first episode watched, which will combine both the advertisers’ and Hulu’s branding in a message that acknowledges the viewer may be about to watch many episodes in a row.

A separate but similar message acknowledging binge-watching behavior will show up again in the last ad break of the second episode watched. Before the third episode airs, the final ad will appear, offering viewers either an ad-free third episode sponsored by the advertiser or a special offer, like a discount code.

In the initial ads, Sparkle and Maker’s Mark have both opted to reward binge-watching viewers with an ad-free third episode; Cheez-It will offer viewers $1 off an order through a special URL.

Jeremy Helfand, Hulu’s vice president and head of ad platforms, said the format was designed to take advantage of the relatively recent phenomenon of binge-watching.

“Binging is one great example of that changing behavior—and we’re responding to that with the right type of advertising experience that realizes that someone is sitting down and watching several episodes of content, as opposed to appointment TV.”

The ads won’t appear for all viewers. Hulu is using machine learning to determine when to place the ads, Helfand said, based on information like a viewer’s past viewing behavior, the program being watched, and the time of day and day of the week that a show is being viewed.

The streaming service expects to roll out the binge ad format to all Hulu advertisers in the second half of 2020.

The binge unit is the second major new ad format that Hulu has developed for its service, which aims to have half its ad revenue come from non-traditional advertising formats by 2021. The company introduced pause ads earlier this year that appear after ad-supported Hulu users press Pause on programming.

And binge ads are not the only new ad format in the works. Hulu is developing a transactional ad format, which will direct viewers to a second screen to interact with offers from advertisers. Those ad formats, which are still in the development stages, will debut in the coming year, Helfand said.

Hulu’s ad-supported offering got a boost this fall when Disney, which owns two-thirds of Hulu and assumed operational control of the service earlier this year, bundled the ad-supported tier of Hulu with its streaming services Disney+ and ESPN+. While Hulu didn’t have updated subscriber numbers to share (the company last reported 28.5 million subscribers), Helfand said the bundle has been a positive for Hulu’s ads business.

“If anything, the combination of that bundle and being part of the broader company just strengthens our offer more,” Helfand said.