Fox Will Launch Its Marketing Campaign for Pitch, Its Fall Baseball Drama, During the All-Star Game

MLB is a partner of the show 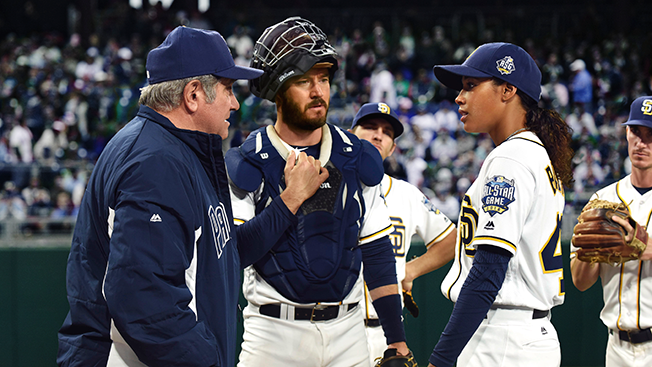 Fall premiere week is still more than two months away, but Fox is stepping up to the plate early for its new Major League Baseball drama, Pitch, launching the show's marketing campaign during next week's MLB All-Star Game festivities.

The drama is about a minor league pitcher named Ginny Baker (played by Kylie Bunbury) who becomes the first female pitcher to make the majors. The show has the full support of Major League Baseball, which is partnering on the series and allowing the inclusion of real MLB teams and logos. The San Diego Padres, which is Ginny Baker's new team on Pitch, are featured prominently in the series.

Fox is broadcasting Tuesday's 87th MLB All-Star Game, which will be held at San Diego's Petco Park, and the network is taking full advantage of the event to market the show to baseball fans. The network is partnering with Fox Sports (which is also featured in Pitch) and Major League Baseball for several Pitch-themed All-Star Game events and promotions.

"It's a great place to launch the show," said Angela Courtin, Fox Broadcasting evp and CMO. "We'll be using the All-Star Game, and all the events and the activations to get fans excited about the show, and to build awareness with players as well."

The network had initially slated Pitch for midseason when it unveiled its fall schedule to advertisers in May. But four days after its upfront presentation, the network shifted the show to fall (it debuts Thursday, Sept. 22 at 9 p.m.) to take full advantage of Fox's MLB telecasts—which includes weekly games, the All-Star Game and the World Series—as a promotional platform.

"There was more ground for us to cover, from the All-Star Game, through minor league and major league baseball during the season," said Courtin. "And we have the World Series, which is the pinnacle of the season, and will dovetail nicely into where we are within the story."

On Tuesday, Fox Sports 1 host Katie Nolan will interview Mark-Paul Gosselaar, who plays the Padres captain, for a pre-taped piece that will run during pre-game coverage of the All-Star Game. During the game, announcer Joe Buck (who also appears in the Pitch pilot) will throw to a 30-second Pitch spot, which will also air in the stadium. The network's All-Star coverage will also include shots of Bunbury and Gosselaar at the stadium during the game.

Gosselaar and Pitch co-star Mark Consuelos (who plays the Padres GM) will play in Sunday's All-Star Legends & Celebrity Softball Game at Petco Park, which will air Monday on ESPN after the Home Run Derby.

The network will give fans on-site in San Diego a chance to try and hit Ginny Baker's screwball pitch, as part of The Pitch Zone Experience, from Sunday to Tuesday at 7th and Market. "What would it be like to stand at the plate and have to take a pitch from Ginny Baker, and how would you do?" said Courtin.

After the All-Star Game, Fox will shift from a national to a local baseball marketing push. The network is partnering with 55 minor league baseball teams and Fox affiliates for Pitch Night At the Ballpark, which will run from Wednesday, July 13 through Thursday, Sept. 22 and include a screening of the Pitch pilot, a baseball game, a cookout and a pitching clinic for kids.

"We're always looking for in-real-life experience," said Courtin. "Ginny Baker moves from the minor leagues to the majors, so we want to go to the minor leagues and talk about that. Very rarely as a marketer do we have the opportunity to have this constant connection over an eight-week period—fans of baseball and families—to really elevate our story beyond just what is a fictionalized version but what could potentially be reality hopefully soon. The [Sonoma Stompers in California] just added their first female players to the roster, so it's happening."

While this is earlier than the traditional window in which networks launch their marketing campaigns for new shows, "the playbook has changed quite a bit" in recent years, said Courtin. "We look at the opportunity where we can speak to the greatest amount of fans to kick off a campaign. So rather than look at the playbook of what used to be six weeks [from premiere] and then you'd start your campaign, we're really looking to be opportunistic in environments or at cultural events where we can resonate loudly. For Pitch, it makes absolute sense to be at the All-Star Game and use that as our launching of the campaign."