Ratings Plummet for NCAA Championship After Its Move to Cable

Even though the game was an all-time classic 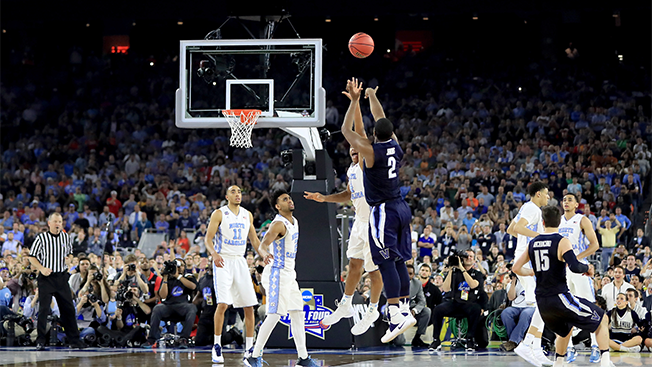 At the beginning of the 2016 NCAA Tournament, Turner Broadcasting president David Levy claimed the difference between broadcast and cable "is almost nonexistent anymore."

However, despite a national championship game that will go down as a classic—Villanova defeated North Carolina on Kris Jenkins' three-pointer as the clock expired—the NCAA title game averaged 10 million fewer viewers than last year.

This was also the first year the title game aired on cable TV.

In terms of household rating—the metric by which sports ad sales are sold— Monday's game notched a 13.2, down 38 percent. It was the lowest-rated national championship game ever.

From now until the end of the rights deal—through 2024—CBS and TBS will alternate airing the championships and Final Four. But attributing the steep drop to moving the game from broadcast to cable only tells part of the story.

Cable networks, even those with wide carriage like TBS, still have a far smaller reach compared to their broadcast counterparts. But they can still draw a crowd.

Turner's coverage of the Final Four game last year between then-undefeated Kentucky and Wisconsin notched more than 22 million viewers. ESPN brought in more than 30 million viewers in its inaugural airing of the College Football Playoffs in January 2015. Despite a drop-off this year, ESPN still drew more than 25 million viewers to watch Alabama defeat Clemson.

But over a three-week tournament, momentum, or lack of it, will affect the ratings. Both Final Four games over the weekend were noncompetitive, particularly Villanova's 40-point drubbing of Oklahoma, leading to lower than normal ratings. Collectively, both games slid more than 37 percent from 2015.

This year's March Madness field also lacked dominant teams—power programs like Kansas, Syracuse and North Carolina all went deep, but none had the star power of previous teams. Last year's final included Duke, among the most popular programs in college basketball. North Carolina has a massive national following as well, but Villanova doesn't. This was the Wildcats' first title since 1985.