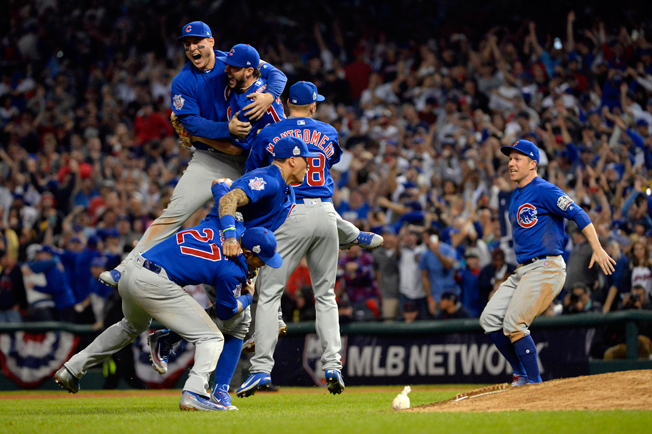 For one week, at least, baseball is once again bigger than football: 40 million people tuned in Wednesday night to watch the Chicago Cubs win its first World Series title in 108 years.

The thrilling Game 7 matchup in which the Cubs defeated the Cleveland Indians 8-7 in 10 innings, overcoming several Cleveland rallies and a 17-minute rain delay at the end of the ninth, had 40 million viewers, according to Nielsen fast national ratings, and a 12.6 rating in the 18-49 demo.

It is the most-watched World Series game in 25 years—50.3 million tuned in to see the Minnesota Twins defeat the Atlanta Braves in Game 7 of the 1991 World Series—and just edges Game 7 of the 2001 World Series, when 39.1 million watched as the Arizona Diamondbacks beat the New York Yankees.

Wednesday night's Game 7 is the most-watched telecast since Super Bowl 50, which drew 111.9 million viewers, in February. It beat every night of NBC's Rio Olympics coverage, which topped out when 33.4 million watched Michael Phelps win his record-breaking 20th and 21st gold medals on Tuesday, Aug. 9. And it also dwarfs the 34.4 million viewers for the Oscars in March.

Fox said that the World Series ratings have propelled the network into first place in 18-49 this season (though that number will begin to erode, now that baseball has ended).

Some of Fox's competitors waved the white flag last night, not wanting their original episodes to be crushed by the Game 7 audience. NBC aired Law & Order: SVU and Chicago P.D. repeats, while CBS substituted a repeat of Criminal Minds but stuck with new episodes of Survivor and Code Black. The CW also broadcast new episodes Arrow and Frequency. ABC aired its live broadcast of the 50th Annual CMA Awards, which came in second for the night, with 12.75 million viewers and a 2.9 rating in the demo.

The World Series has been an advertising windfall for Fox Sports, which charged more than $500,000 per Game 7 spot, according to sources. Last year's World Series, which went just five games, took in $240 million in ad revenue, according to Kantar Media.

Nike aired a salute to the Cubs in the first ad slot after the final out, while Budweiser, which ran several in-game spots, also made a splash after the game, re-airing a classic commercial from the 1980s featuring legendary Cubs announcer Harry Caray.

Earlier this month, Cubs playoff games led Fox Sports 1 to record ratings. The National League Championship Series between the Cubs and the Los Angeles Dodgers averaged 7 million viewers, and Game 6 had 9.7 million viewers to become the most-watched telecast in network history. The week of Oct. 10, FS1 beat ESPN for the first time ever in both prime-time and total-day viewers.