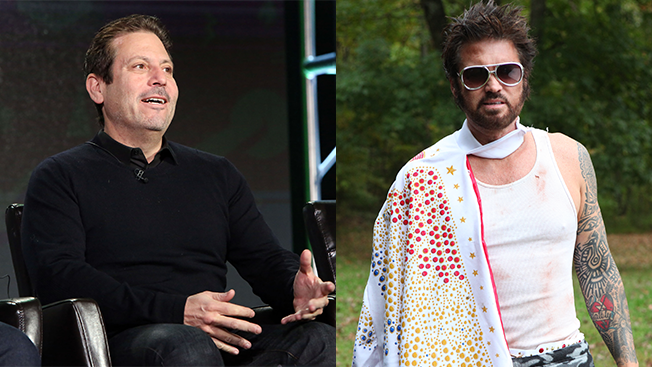 One day after Nickelodeon kicked off the 2016-2017 upfront season, the other two networks in the Viacom Kids and Family Group, CMT and TV Land, made their respective pitches to buyers and advertisers Thursday at New York's Jazz at Lincoln Center.

Country-themed CMT announced plans to double its original programming in the coming year and move into scripted series for the first time. That represents "a quantum leap" for the network, CMT president Brian Philips told Adweek.

By adding scripted to the network's other three "lanes" of programming—music, unscripted and documentary—"it allows us to invite more viewers to the channel and hopefully find more fans," said CMT's evp of development, Jayson Dinsmore. "Premium scripted is really what is resonating with most audiences these days, and we needed to get into that game."

CMT's first scripted series, Still the King, will premiere June 12, four days after the 2016 CMT Music Awards. It's about a washed-up, one-hit wonder of a musician (played by Billy Ray Cyrus, who knows a little something about being a one-hit wonder) who discovers he has a 15-year-old daughter.

The network also has Million Dollar Quartet debuting in November. Inspired by the 2010 Broadway musical set in 1950s Memphis, it focuses on how Elvis Presley, Johnny Cash and Jerry Lee Lewis became stars.

"It's a coming-of-age story about the birth of rock 'n' roll," Dinsmore said. "When we developed the show, we purposely tried to create an idea that would appeal to a wide variety of viewers, regardless of the fact that our lead characters just happen to be Elvis Presley, Jerry Lee Lewis, BB King, Ike Turner and Johnny Cash." The cast performed Presley, Cash and Lewis' songs for the upfront audience.

CMT isn't abandoning its music roots. Philips announced a new summer event, CMT Concert of the Summer, which "is set up to become a huge annual tent pole on the channel," he said. It will take place at one big country music stadium concert and feature a superstar headliner and opening acts. "It's our way of saying that no matter how far we venture into all of these different genres of programming, music will always be the backbone [of CMT]," said Philips.

The network hasn't decided whether the show will be broadcast live, nor did it announce which artists will be featured this year. "But there are only about 10 artists on the planet Earth—and six of them happen to be country—who will be able to command a venue that large," Philips said.

The network has three new documentaries on tap—Nascar: The Rise of American Speed (a three-part series beginning May 8) and two that will debut at SXSW: The Bandit, about the making of Smokey and the Bandit, airing in August, and Chicken People, which debuts in November. Its unscripted slate includes I Love Kellie Pickler, which has been renewed for a second season, and new series The Dude Perfect Show, which premieres April 14 and follows the five members of Dude Perfect, who have become digital superstars thanks to their trick shots and sports videos.

CMT hopes its new programming will help the network partner with brands. "We're really becoming a full-service brand and ready to partner year-round, as opposed to having moments throughout the year where we light everything up. There's something for everyone, all year long," said Anthony Barton, CMT's svp of integrated marketing. "I love that we're welcoming more people to this table in a way that we've never done before. And when we do that, it only should be exciting for the advertising community to see some new opportunity, some new way of talking about this target audience that perhaps hadn't thought about CMT before."

While CMT is expanding its reach, its sister network, TV Land, took its upfront time to tout its successful branding last year for Gen Xers. The network ditched nostalgia-themed shows like Hot in Cleveland for edgier comedies like Younger (which has the youngest median age in TV Land history), The Jim Gaffigan Show and Impastor.

"Staying in the genre of comedy in a world where everyone is talking about peak TV, we knew we needed to do something with our comedies to make them feel more urgent," Keith Cox, evp of development and original programming at TV Land, told Adweek. "We added a lot of dramatic moments to our comedies. We were doing more multicams that matched our acquisitions. Now, the originals have their own voice. We are a cable channel; why not do things more cable-esque?"

TV Land announced a new deal with Darren Star, Younger's creator and executive producer, that will keep him on board at Younger while he also develops another project for the network. Producer deals are rare for cable, but Cox said he was "getting frustrated" hearing that competitors were trying to develop new shows with Star after Younger's success last year. "So, boom—lock him up, keep him on the show and find a companion."

The network renewed its freshman comedy Teachers for a 20-episode second season, an order that doubled its Season 1 count of 10 episodes (which has quietly become the industry standard for scripted series). "We may not air all 20 at once, but I have the luxury to break it up 10 and 10. Right now, truth be told, I'm kind of hand to mouth," said Cox, who wanted to order more Younger episodes as well but couldn't because the show is "densely written," with Star wanting to maintain a presence both in the writers room and on set.

In addition to airing footage of its upcoming George Lopez comedy, Lopez, which premieres on March 30—"It's not anything like he's done in his multicams," Cox said of Lopez. "He goes to very interesting, dark places"—TV Land announced that it has greenlit production of two new pilots.

The first is an adaptation of the 1996 comedy The First Wives Club, which will be executive produced by Jenny Bicks from Sex and the City. The show will take place in modern-day San Francisco and center around three college friends who reconnect. There's also an untitled project from The Real Housewives of Beverly Hills' Kyle Richards set in the '70s and inspired by her upbringing. The show is executive produced by John Wells (ER and Shameless) and John Riggi (The Comeback and 30 Rock), with Richards will co-executive producing but not starring in the series.

The network had previously announced a third pilot, Nobodies, executive produced by Melissa McCarthy, about a group of comedy hopefuls who have watched as some of their friends became famous. But the network said it isn't finished yet. "We have two or three more exciting things coming," Cox said.

Cyma Zarghami, president of Viacom Kids and Family Group, also spoke briefly about Nick at Nite, which now ranks No. 2 in cable among women ages 18 to 49.