Check Out Gayle King’s Colorful, Down-to-Earth Home Away From Home at CBS 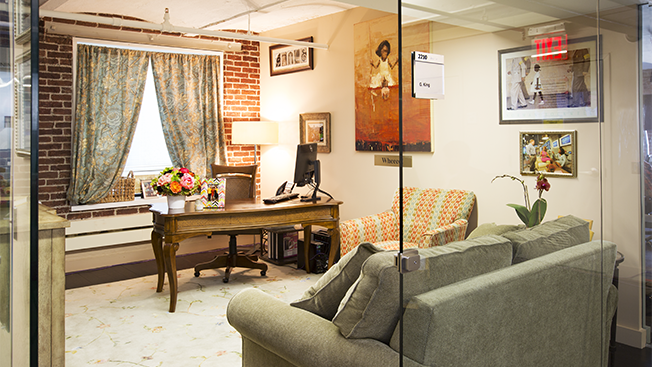 Since CBS This Morning debuted in 2012, it's enjoyed steady gains for the network in the daypart. It's the fastest-growing network morning show, in fact, averaging 1 million more viewers than when it launched. That success has much to do with the warm and cheerful presence of co-host Gayle King, who, in addition to her CBS digs, keeps an office up New York's 57th Street in the Hearst Tower, where she serves as editor at large of BFF Oprah Winfrey's O, The Oprah Magazine. She has filled her CBS workspace (pictured here) with her favorite things: a painting she got in Telluride, Colo., photos of her children, a signed copy of the play Hamilton. Mostly, though, the domain, just like King herself, is traditional and down to earth. "I'm not a contemporary, modern girl—chrome, silver, glass," she said. "This is so funny about me, because I always say, 'I'm going to try something different,' but I always go back to the same old traditional things." King's favorite colors—yellow, green, burnt orange—are prominent here, as well as in her home. Said King: "If I move something from my house to the office, it works because it's the same damn colors!"

“The little girl on the swing is my favorite thing [in my office],” said King. “I had the ‘Wheee’ sign made because I think that so captures the spirit and essence of how I feel about being here. I really do feel like that little black girl on the swing who is just so excited about life and to be doing what I’m doing where I’m doing it.”

After interviewing the Obamas, the president agreed to a brief interview with King in the Oval Office. “I like the picture because it shows we’re engaged.”

“We’d been on the air less than a year and Jeff Glor did a story on the Marucci family. They sent us all these engraved bats. [To me], it signifies when we were just starting,” said King.

“Who would think wearing a belt with shorts is cute?” said King, who has two grown children. “But I did back in the day!”