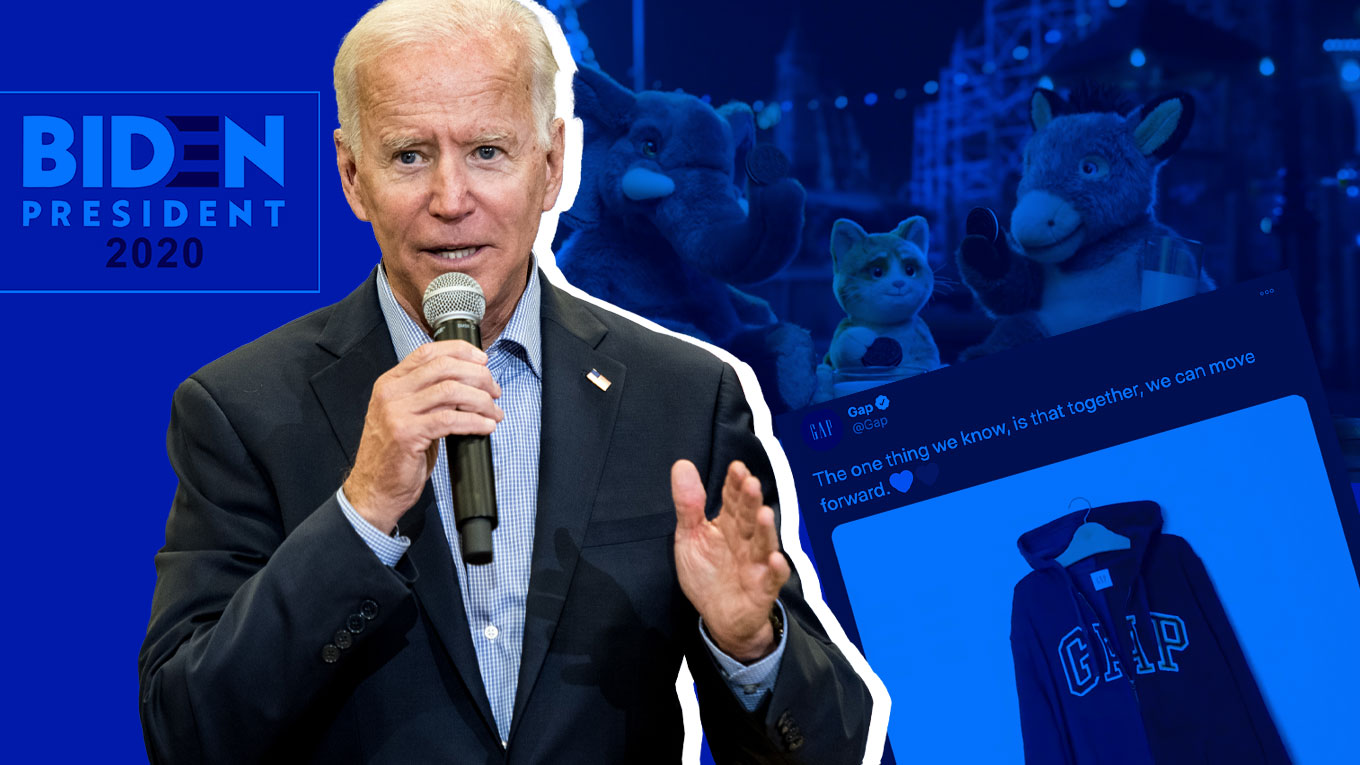 Joe Biden's win for the presidency could spell a period of less stress for both American people and companies. Getty Images, Oreo, Gap While the professionals working in advertising, media and technology may tend to lean more left than the public at large, conservatism is regarded as a core virtue by brand decision-makers.

In that sense, having Joseph R. Biden as the 46th president of the United States could represent a balm for both ends of the advertising industry’s political spectrum. The 2020 Presidential Election was called just before 11:30 a.m. ET when the Associated Press gave Biden Pennsylvania’s 20 electoral votes, therefore making him President-elect.

As a deep-seated member of the Democratic establishment, Biden has obvious appeal to businesses across the board: Unlike the mercurial, bombastic Donald Trump, the incoming president has made consensus and steadiness a hallmark of his campaign.

Brand leaders prize one thing more than shared political sympathies for low taxes and less regulation: They place a premium on stability and loathe abrupt changes in policy. Knowing what’s coming is more than appreciated by businesses, particularly Big Tech players who have been prepping for an incoming Biden administration for weeks.

Being able to plan ahead and have clear visibility based on what’s coming from the White House and Capitol Hill reduces a major point of stress among enterprises small to large.

The new normal will be a return to the old normal

From a policy stance, a Biden administration would appear to be a “return to normalcy” for the U.S. On the Congressional front, the Democratic House of Representatives paired with a Republican-controlled Senate also offers a semblance of checks and balances that could temper any major policy and regulatory changes.

Although Biden’s reign will return Washington, D.C. to a more comforting level of routine politics, advertisers, agencies, media companies and ad-tech firms will remain in the realm of the unprecedented on many fronts.

Look for more pronounced demands for increased scrutiny regarding the protection of online privacy. The fast approach of the post-cookie future may only accelerate under a new administration.

Intense pressure will be brought to bear on social media and content companies to guard against misinformation spreading across platforms. Twitter and Facebook have already demonstrated a new commitment to labeling baseless claims, such as flagging Trump’s posts alleging election fraud. At the same time, publishers will be forced to greater levels of creativity to seek more reliable revenue sources as the news cycle cools to some extent and Covid-19 continues to curtail everything from events to travel and in-store shopping, restraining marketing budgets.

As streaming TV matures, the competitive stresses will become more acute. As ViacomCBS’s outgoing chief digital officer Marc DeBevoise told Adweek in September, some of its smaller services “will not exist in the long run.” Over the next year, streaming companies’ fate will depend on whether they can continue as standalone brands or if being absorbed into a larger corporate entity is the only option for survival. Antitrust issues may also come up in this area.

At the same time, cable and broadcast networks may already be lamenting the huge audience numbers driven by frenetic political drama, with election night possibly representing a ratings plateau for news channels.

Ahead to the past

Hanging over all the change coming to D.C. are two things that will not fade with a new political regime: the bitter divisions in a country, and a world, besieged by an ongoing pandemic, and the threat of climate change continuing to loom larger.

Elections and advertising culture can be thought of as two distinct “time machines.” Voters generally tend to skew older. Advertising tends to focus on appeals to younger demographics.