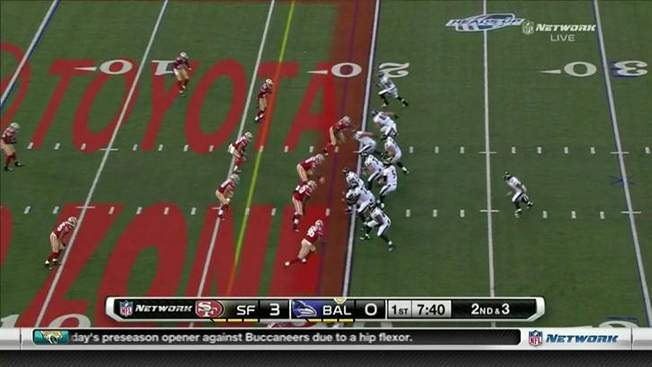 Here's an agreement between The Northern California Toyota Dealers Association and the San Francisco 49ers that seems to have caught viewers’ attention in all the wrong ways: During the team’s first 2014 preseason game on CBS affiliate KPIX last Thursday, computer-generated ads for the car dealers covered the red zone. The graphics appeared when the offense for either the 49ers or their opponents, the Baltimore Ravens, started a down inside the opponent’s 20-yard line.

The messages remained onscreen during actual game play. So far it's only on local ads, but locals do not care for it.

Other teams have also begun experimenting with red-zone advertising—much to the displeasure of the NFL’s target demo. Deadspin called the campaigns “horrifying,” and SB Nation used bold text and all caps when titling one of these stills from the Aug. 8 St. Louis Rams-New Orleans Saints game “More Horrible Preseason Red Zonage.”

Responding quickly to the negative reactions, advertisers revamped their approach. Following last Thursday night’s game in Baltimore, a Toyota spokesperson told ABC News, “During the remainder of the 49ers' preseason games, fans and viewers should no longer see the Toyota Red Zone once the ball is snapped."

The NFL Network plans to continue allowing red-zone advertising throughout the preseason but not during the regular season.

The regional car dealers created the scaled back campaign as part of its multiyear deal to serve as the “the exclusive auto partner of both the team and Levi’s Stadium.” The group has also set up a Toyota Plaza inside the new stadium and committed to supporting the 49ers’ community outreach programs.

Regarding the decision to redesign the Toyota Red Zone, the company spokesperson explained, “We're football fans too. We've heard fan feedback and it's not our intention to distract from the joy of the game."