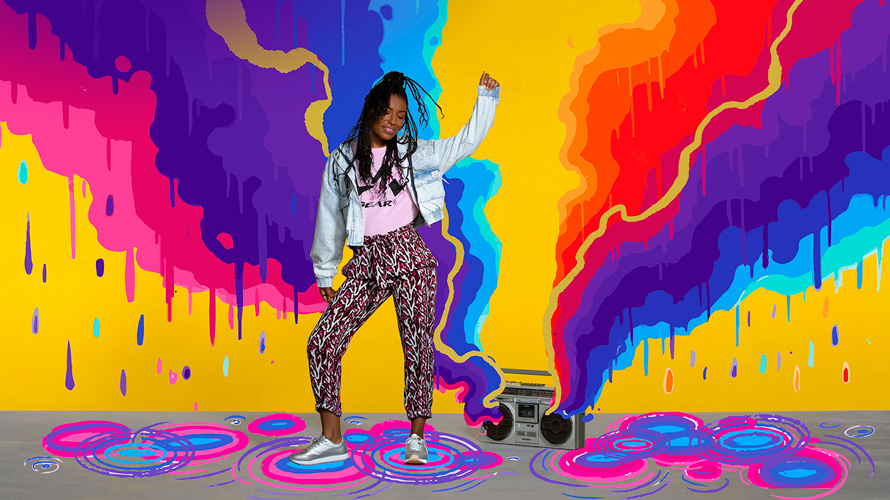 Payless is rebranding itself by dropping ShoeSource from its name as it launches ecommerce and reveals plan to open stores. Kreative Kontent/Fro Rojas

After emerging from a nearly yearlong bankruptcy process in January, discount footwear retailer Payless is back.

This week, the company announced the relaunch of its brand in the North American market, unveiling its new (and open for business) ecommerce platform and brick-and-mortar concept stores.

The footwear purveyor aims to unveil its first location in Miami in November, with a goal of opening between 300 and 500 free-standing stores over the next five years across North America, Payless CEO Jared Margolis told Adweek. The openings will provide a much-needed boost to physical retail at a time when a number of chains are shutting their doors.

The move is a reversal from last year, when at the end of July as part of its bankruptcy proceedings, Payless had closed 2,100 locations, the most of any retailer.

Now, the chain is viewing stores not only as a point-of-sale, but also having a role to play in its marketing.

“We do see stores as an opportunity to engage with our customers by creating cohesive interactions between shopping and marketing,” Margolis said. “From our new experiential stores featuring modern designs with onsite digital components to our online marketing via cross-channel programs with CRM touch points, the new Payless had to be all connected.”

Payless designed its stores with the thought that they would be an omnichannel destination, he explained. That includes smart mirrors, touchscreen wall panels and “a first-of-its-kind” augmented reality foot comparison chart.

“We took the best aspects of the self-service concept Payless created and modernized it with data, technology and branded and in-store experiences,” Margolis said.

In addition, rather than delay any of its plans due to Covid-19, Payless actually accelerated the relaunch of online commerce, which existed pre-bankruptcy but was wound down when stores were closed.

“Because of the pandemic, we launched Payless.com earlier than planned. Our full brick-and-mortar rollout was always slated for the 2021 year, and our new concept is now even better positioned for the new normal,” Margolis said.

Fortunately for the footwear retailer, it was not impacted in the U.S. by the pandemic because it had yet to open any stores, though its global operations faced many of the same challenges as other retailers, he explained.

Though the chain has yet to open its first store in North America, it currently operates some 700 locations internationally, including more than 400 in Latin and Central America. When Payless filed for Chapter 11, its international operations were not included.

Even with the rebranding and new stores, Payless intends to continue to offer products with shoppers’ wallets in mind. The retailer said that in light of recent events, providing value is more relevant than ever.

“We saw an opportunity for the brand to relaunch into the U.S. market, providing our community with the affordable, value-driven products they’ve always searched for, now across multiple categories, at a time when value couldn’t be more critical,” Margolis said in a statement.

Payless is offering private label brands such as AirWalk and American Eagle, as well as K-Swiss, Kendall + Kylie and Aerosoles.

The company is also rebranding itself, modernizing its name by dropping ShoeSource, but otherwise keeping its familiar logo and font. On the homepage of the retailer’s website, an accompanying video showcases the new Payless, and aptly a plethora of sneakers, by taking viewers behind the scenes of a photo fashion shoot, concluding with the tagline, “You lead the way.”