Fare is divided into three categories: shop, Air.Jordan and watch 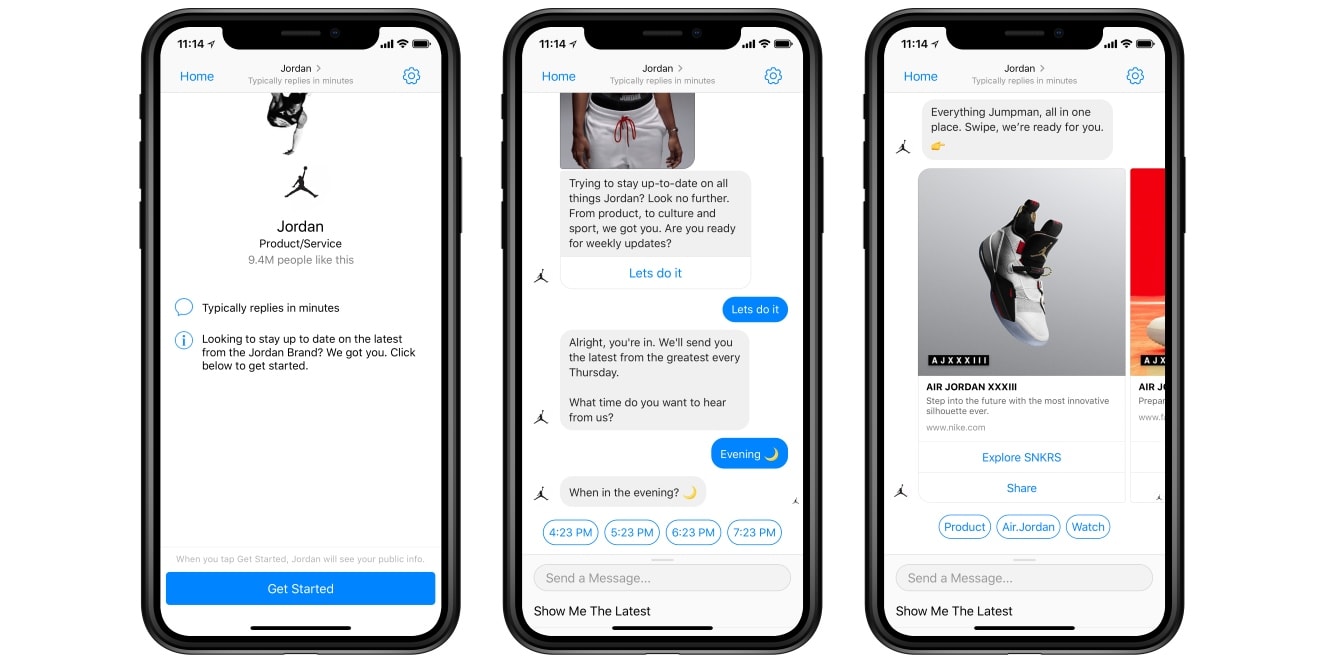 Nike teamed up with conversational artificial intelligence platform Snaps on a Facebook Messenger bot for its Jordan Brand that it hopes will jump out of the gym among the sneakerhead community.

Dan Harbison, global senior director, digital for the Jordan Brand, said his team looks at the two-way conversations enabled by Messenger bots as a massive opportunity, adding, “People will connect with people much more than they will with a large entity.”

Beta-testing of the new Messenger bot began around the time of the National Basketball Association’s All-Star Weekend in February, and Nike said the bot is generating open rates of 87 percent, far outpacing the typical 15 percent to 20 percent it sees from emails.

Harbison added that while he could not offer specific numbers on how many people are using the bot, his team is really happy with the fact that engagement with the bot has remained strong despite it being made available to a much broader audience.

The bot delivers content from the Air.Jordan blog, Jordan News and Jordan.com via weekly updates, and that fare is divided into three categories: shop, Air.Jordan and watch.

The watch category does not refer to the social network’s Facebook Watch video destination, but to some videos that are self-contained within the platforms, as well as links to broader stories from sources such as the Nike application or the Air.Jordan blog.

Fans can customize the day of the week and time of day that they will hear from the bot.

The Messenger bot also delivers unique responses to specific phrases such as “Air Jordan 1,” bringing readers to the Collection website via an external pathway link and enabling them to go back and forth between Messenger and the Collection site.

Harbison said the bot was promoted via the brand’s social platforms, such as Facebook and Instagram, and also to Jordan.com members, “the people we want to take care of the most because they love Jordan the most—the Jumpman family.”

He added that Nike is exploring how to add more customer-service functions to the bot with the aim of driving people to human beings.

The new bot is not the Jordan Brand’s first experience with Messenger: Jordan Breakfast Club, which debuted in August 2016, enabled people to try to keep up with Michael Jordan’s famous workout regimen.

It delivered daily workouts via push notifications, as well as inspiring content and access to videos or GIFs detailing how to do the workouts.