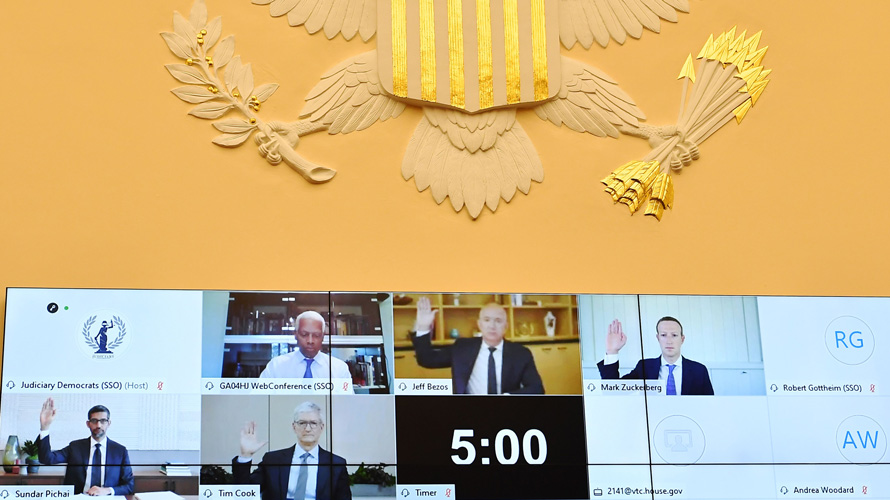 Editor’s note: This article has been updated to reflect statements from Google and Apple.

Antitrust watchdogs in the U.S. House of Representatives issued a report today proclaiming that Amazon, Apple, Google and Facebook have abused their market power and called for government intervention.

While these companies have delivered “clear benefits to society,” it has “come at a price,” legislators wrote.

“To put it simply, companies that once were scrappy, underdog startups that challenged the status quo have become the kinds of monopolies we last saw in the era of oil barons and railroad tycoons,” the report continued.

The 449-page report from the House Judiciary Committee’s Antitrust Subcommittee said that these firms “run the marketplace while also competing in it” and have become “unaccountable to anyone but themselves.”

The committee’s investigation, which lasted for more than one year, found “evidence of monopolization and monopoly power” in each of the four companies. And while legislators highlighted those companies’ reach as a whole in the digital marketplace, each was called out for individual abuses.

The report also alleges that Facebook identified competitive threats to “acquire, copy, or kill” nascent firms. Facebook acquired Instagram for $1 billion in 2012 and WhatsApp for $19 billion in 2014.

Google, the report said, maintained its monopoly in online search through “an aggressive campaign to undermine vertical search providers, which Google viewed as a significant threat.” Yelp, one of those competitors, testified against Google before Congress recently.

According to the report, Amazon treated its own third-party sellers as “internal competitors,” legislators said, using their position to advantage themselves over those looking to sell products on their platforms.

Apple, on the other hand, exercised monopoly power on its iOS operating system, the report said, “reducing quality and innovation among app developers, and increasing prices and reducing choices for consumers.” Apple and Google have recently sparred with Epic Games, makers of the popular game Fortnite, over what Epic claims is unfair practices in their app marketplace.

Among the recommendations made in the report, legislators suggested examining the platforms’ businesses to further address anticompetitive behavior, new efforts to double down on merger and monopolization and restoring oversight of antitrust laws.

“Americans simply don’t want Congress to break Google’s products or harm the free services they use every day,” Google said in a statement. “The goal of antitrust law is to protect consumers, not help commercial rivals.”

In a statement, Apple claimed it “does not have a dominant market share in any category” and said the App Store “enabled new markets, new services and new products that were unimaginable a dozen years ago.”

“Until now, critical areas of the Internet have remained unregulated and unchecked, requiring the sort of dedicated investigation that the report reflects,” said the Omidyar Network, a foundation and investment firm started by eBay founder Pierre Omidyar, in a statement. “The potentially illegal market dominance of the largest technology platforms as well as their social and political power is seriously threatening our individual freedoms, workers’ rights, economies, and democracies.”

@ScottNover scott.nover@adweek.com Scott Nover is a platforms reporter at Adweek, covering social media companies and their influence.
@SaraJerde sara.jerde@adweek.com Sara Jerde is publishing editor at Adweek, where she covers traditional and digital publishers’ business models. She also oversees political coverage ahead of the 2020 election.