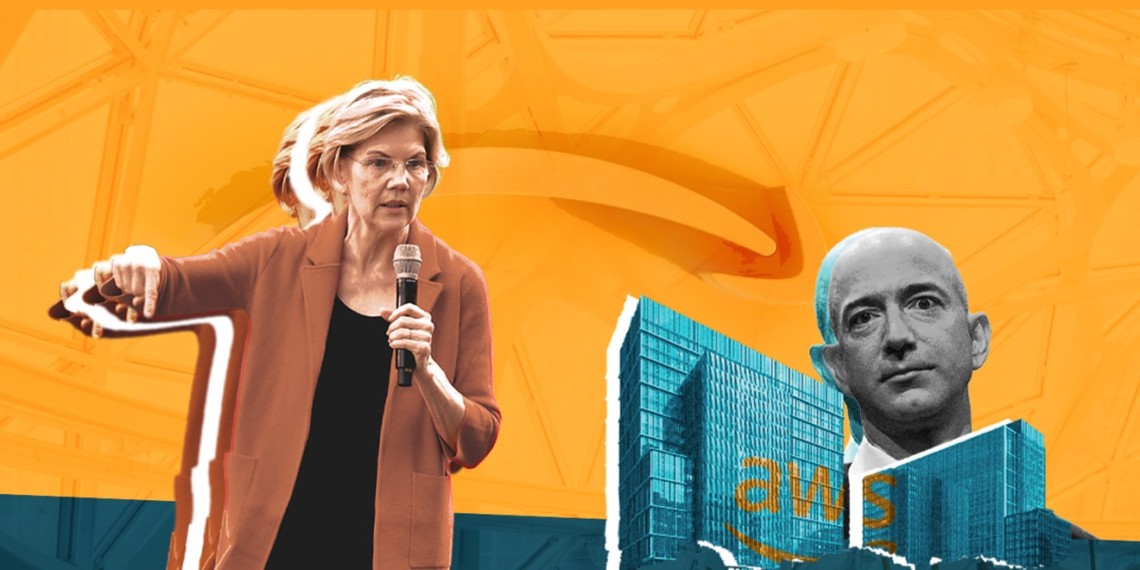 Elizabeth Warren has a plan to break up Big Tech if elected president, and Amazon is a part of it. Illustration: Trent Joaquin; Sources: Getty Images, Amazon

If elected as the 46th president of the United States, Sen. Elizabeth Warren says her plan to break up Big Tech includes severing Amazon’s Marketplace and Basics line of products from the company and reversing what she calls its anti-competitive acquisitions of Whole Foods and Zappos.

At least four other candidates vying for the Democratic nomination have also voiced support for antitrust action, although they’ve been lighter on specifics.

And yet when it comes to prognosticating Amazon’s future, experts like NYU marketing professor Scott Galloway and Atlantic writer Franklin Foer say that if anything, it’s Amazon’s highly profitable cloud-computing business Amazon Web Services, more commonly known by its acronym, AWS, that will become a separate company.

There are strong opinions for and against a spinoff, but one thing seems clear: Whatever happens, it will be Amazon’s decision.

The case for spinning off AWS

Spinning off AWS, the company’s $400-billion business, is all about self-preservation. No one Adweek spoke with thinks Amazon wants to sever AWS, but some said it may choose that path to control its own destiny, effectively making AWS a sacrificial offering to the regulatory gods.

“If the writing is on the wall and pressure is building for regulatory action … then [Amazon] might decide to do it in a way they can control,” Wilson said.

The goal for Amazon would be retaining its other properties thereafter and keeping them intact.

Amazon did not respond to a request for comment on this sacrificial-lamb theory, but an AWS spinoff might also appease consumers who happen to be voters. And those voters will start to demand elected officials step in if big companies act like bullies.

“Politicians respond to … pressure by voters,” said Bill Wilmoth, a former U.S. attorney who now practices at the firm Steptoe & Johnson. “Everyone sees Walmart decimate downtowns and Amazon getting rid of retail. … People may end up getting tired of that conduct by big companies in any industry and start demanding the federal government step in and be more aggressive.”

More fuel to the fire: Consumers are more aware tech companies have played fast and loose with their personal data. This, in turn, could prompt the public to rise up, which Wilmoth said would be the moment Amazon decides it’s best to spin off AWS.

“They always seem to be a step ahead and the government doesn’t move very quickly,” Wilmoth said. “If it happens, it will be Amazon’s idea.”

An AWS spinoff is also more likely if a Democrat is elected in 2020. That’s in part because Republicans are far less likely to pursue an enforcement action or try to extend antitrust laws, said Colin Kass, a partner at the law firm Proskauer who is also co-chair of its antitrust group.

“Substantially reducing the size and footprint of the company by spinning off AWS may help to mitigate [additional scrutiny under a future administration],” Wilson said. “So, while it’s not the primary consideration, the partisan political climate is one factor shaping Amazon’s decisions on how to structure itself going forward.”

However, if Amazon can simply keep its nose clean, it might be able to avert antitrust action altogether, Wilmoth said.

“I’m in West Virginia. Here, we say, ‘Hogs feed, but pigs die,’” he said. “If [Amazon is] a hog and continues to grow nicely and [doesn’t] get too aggressive, they will thrive, they’ll feed. If they overreach, the government will eventually perhaps intervene and cut them up.”

The case against spinning off AWS

The argument against spinning off AWS centers on lack of motivation, evidence and precedent.

Melissa Burdick, a 10-year Amazon veteran who is now co-founder and president of ecommerce platform Pacvue, said she doesn’t expect Amazon to spin off AWS unless it is forced to by the government.

“I think Amazon will fight tooth and nail [against being broken up],” she said, adding that we’re already seeing Amazon proactively talk about what a small percentage of retail it controls as a means to that end.

Warren’s campaign did not respond to a request for comment, but the plan posted on her website says she would “appoint regulators committed to reversing illegal and anti-competitive tech mergers,” like Amazon’s deals with Whole Foods and Zappos.

Yet the $400-billion question is whether Amazon is, in fact, anti-competitive. According to the Federal Trade Commission, that would mean behaving in a way that “[reduces] competition and [leads] to higher prices, reduced quality or levels of service or less innovation.”

“It is important to note that it is not illegal for a company to have a monopoly, to charge ‘high prices’ or to try to achieve a monopoly position by aggressive methods,” the FTC’s website says of anti-competitive behavior. “A company violates the law only if it tries to maintain or acquire a monopoly through unreasonable methods.”

Anindya Ghose, professor of business at NYU’s Stern School of Business, said Amazon is not doing that and questioned why the government would look at a company unless there was misconduct.

“What [is Amazon] doing that is wrong?” he said, “in any sort of legal or ethical or moral way?”

He pointed to Amazon’s share of the U.S. ecommerce and retail markets—48% and around 11%, respectively.

“Walmart is way bigger, but no one is talking about Walmart,” Ghose said. “It’s not fashionable.” Plus, he said, rather than making vertical mergers and acquisitions within a given sector to consolidate power, Amazon is expanding horizontally into spaces like digital advertising, cloud services and voice tech.

Meanwhile, Wilmoth noted the government has been “pretty noninterventional in their approach to antitrust stuff” since the Reagan era.

“With Reagan, they got way less confrontational in enforcement and all the administrations since then, either Democrat or Republican, had that hands-off approach,” he said.

And so, without a fundamental change in the interpretation or the law itself—special legislation that would prevent a company from owning a platform and selling goods on that same platform, for instance—there’s a precedent that indicates Amazon has nothing to worry about.

“Clearly you can, in theory, break up a company like AT&T and Standard Oil, but you can count the number of times that has happened on one hand over the last 100 years of the Sherman Act,” Kass said. “Case law, I don’t think, would support breaking up [tech companies] as a remedy even if you found a violation.”

And, all this talk about breaking up Big Tech might also just be politicians saying what they think voters, particularly those who’ve lost jobs as a result of automation, want to hear.

“Politicians on both sides of the aisle have taken this rhetoric to an extreme level,” Ghose said. “Maybe it’s all politics. You say extreme things, and it helps get some votes.”

Another reason to hold back: “It won’t do any good,” Ghose said. “It will bite people in so many gazillion ways.”

Namely, it will make Amazon less competitive because it will have fewer resources to draw from.

One of Amazon’s strengths is its ability to shuffle employees from one unit to another when a new project arises, Burdick said.

Ghose agreed that breaking a company down into smaller units eliminates synergies and makes it harder to innovate. He pointed to Microsoft, which was a tech pioneer until the U.S. Department of Justice got involved in 2001, and “look where this landed,” he said. “It is way behind the other big tech companies in every meaningful aspect.”

Ghose added, “I think the idea of breaking up a company because it’s too big, to me, sounds unfair and extreme.”

Plus, Burdick said, one of the best things about Amazon is “it’s really into disrupting markets that need disrupting,” (like healthcare). And, without AWS to drive margins, Amazon’s other businesses would face additional pressures, such as having less money to experiment with and therefore fewer swings like Amazon Go.