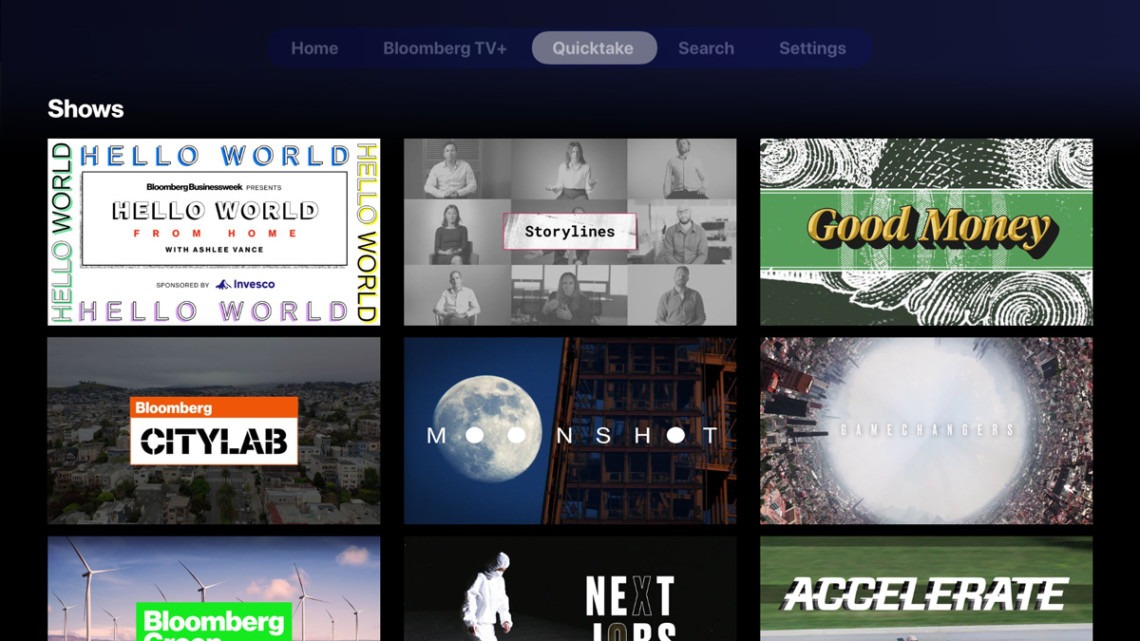 Bloomberg Media’s newly released, ad-supported 24/7 streaming news network, Quicktake, is the latest product from the international financial information company as it continues to expand its audience and invest in over-the-top TV.

Bloomberg Quicktake, formerly known as TicToc, was introduced in 2017 as a 24/7 social video network living on Twitter. The news network launched Monday with 10 original series and four live daily news shows. The network covers topics beyond finance and markets, like climate change and the future of work. Quicktake is available globally across services such as Apple TV, Roku, Amazon Fire TV and through the redesigned Bloomberg app, which also houses Bloomberg TV for deeper markets and finance coverage.

One of the benefits of graduating from Twitter to OTT is that the 100-strong Quicktake team can see how videos perform on social and then tweak programming on the network. In that sense, Quicktake’s current audience is like a “living lab,” though there is not a one size fits all model, said Jean Ellen Cowgill, general manager of the service.

“Each platform is a universe unto itself,” said Cowgill, adding that stories, formatting and mediums are all taken into consideration when deciding what might perform well on the service. Quicktake already has 50 million monthly viewers across social channels, she said. In September, the channel had over 100 million video views across mostly Twitter and YouTube, according to Tubular Labs data.

Bloomberg Media has taken natural advantage of being part of Bloomberg LP, whose profitable Terminal business generated most of its $10.5 billion revenue last year, according to research firm Burton-Taylor International Consulting, via The Wall Street Journal. This cushioned the news company from the more adverse impacts of the Covid-19 pandemic.

The backing of its parent also allows Bloomberg Media to invest in projects like Quicktake as an audience expansion measure. The aim is to look beyond Bloomberg’s core business and finance cohorts, which it serves through Bloomberg TV. Quicktake is also intended to build greater awareness of Bloomberg Media’s subscription business, which currently has 250,000 members.

Bloomberg Media fits into a business-focused market segment, said Richard Broughton, research director at Ampere Analysis, and has proven it can keep pace with the likes of Financial Times and The Wall Street Journal. “Nonetheless, building a new brand in an intensely competitive arena is challenging,” he said.

Broughton went on to note that Bloomberg Media’s integration with a variety of streaming services and the publisher’s ability to cross-promote it across channels, including its main webpage, will serve it well.

“News organizations in particular are finding that the space is less clearly delineated than it historically has been. TV channels have online feeds and written editorial output, while newspapers have moved into video—there is increasingly little distinction between the two categories,” he added.

At launch, the network went live with 10.5 hours of programming and content that mirrors other verticals Bloomberg Media has prioritized. Some examples include The Future of Work, climate-focused Green and CityLab Solutions (a brand it acquired from Atlantic Media in 2019). Content under these verticals will be exclusive to the network, such as interviews with top leaders and category experts.

“The most exciting opportunity for any media company that can—or has the resources—is in OTT. Any time the audience shifts this dramatically, the money will flow,” said Scott Havens, global head of digital and media distribution at Bloomberg Media.

As consumer habits change, connected TV ad spend is expected to also grow and continue to draw dollars away from linear TV. CTV ad spend in the U.S. alone is projected to increase by 25.2 % this year, according to eMarketer, a bright spot for the TV ad industry in an otherwise challenging year.