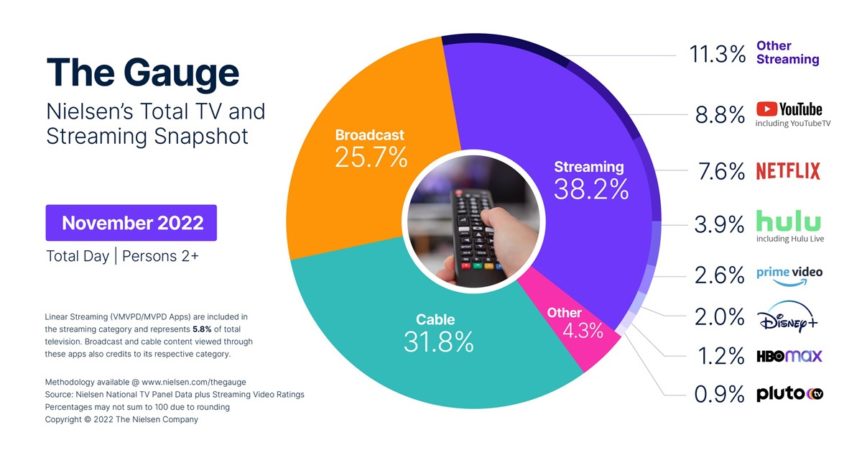 Time spent watching television climbed considerably in November, thanks in part to the four-day Thanksgiving weekend.

Americans watched about 106 billion minutes of content on Thanksgiving alone, contributing to the 7.8% increase in all TV time for the month, according to the Nielsen Gauge report for November 2022.

Streaming continued to reign supreme, breaking the previous record with 38.2% of all consumption. Given the demand for streaming material, viewing volume climbed on almost every streamer, with Netflix (+13.1%), HBO Max (+12.2%) and YouTube (+11.8%) taking the top three spots.

Blockbuster original material from Netflix like Wednesday, Manifest and The Crown helped. At the same time, HBO Max relied on well-known television series like Friends, The Big Bang Theory and Game of Thrones. YouTube, particularly YouTube TV, benefited in November from contributors, music and other sources.

Although less significant than the 10.2% growth in streaming usage, broadcast’s growth of 6.7% in November helped its proportion of TV remain largely steady, declining only 0.3 share points to 25.7%. Sports accounted for 32% of all broadcast viewing, thanks to a 10.2% increase in viewership, much of which was driven by the NFL. Drama viewing fell by 12.5%, but news volume increased by 14.6%.