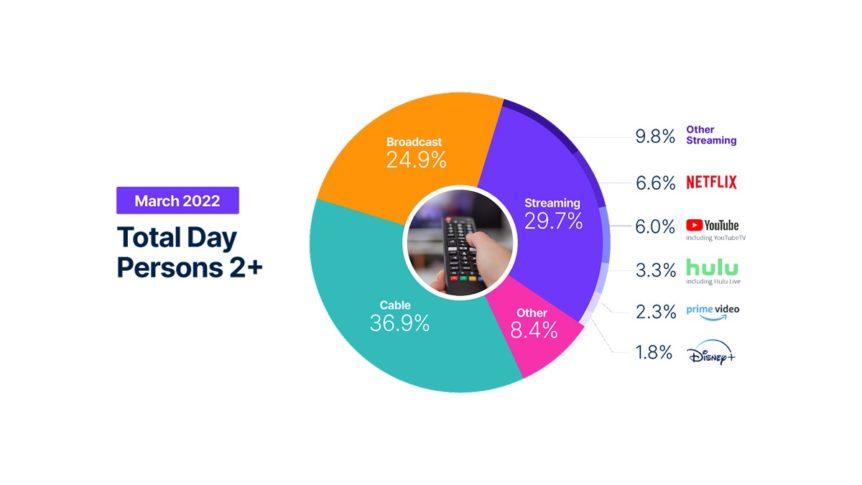 In March, viewers spent nearly 30% of their total TV time watching OTT, marking a new high for streaming. The news comes courtesy of Nielsen’s latest update of The Gauge, a monthly look at how consumers watch content across top TV platforms.

In a posted video, Brian Fuhrer, svp of product strategy and thought leadership at Nielsen, said that streaming services benefited from the shift away from the end of professional football and the Olympics, which boosted fall and winter TV viewing across broadcast networks. Streamers gained a full share point in March over February.

Despite a 0.7% drop in overall streaming, viewing across all streaming providers was stable or slightly up in March, with the “other streaming” category gaining an additional 0.3% share as new services find a foothold in an ever-expanding market.

The minor decrease in streaming usage was significantly smaller than the 4.2% drop in total TV viewing, in line with historical trends as people adjust to the warmer weather. Despite a drop in total usage, Fuhrer said viewers spent more time watching TV on cable, driven by coverage of the ongoing war in Ukraine, which generated a 1.6 share point increase on a modest increase in total volume. News accounted for around 21% of the cable share.

On a month-over-month basis, broadcast programming lost more than a full share point, with sports viewing down 53%. However, Fuhrer said some viewers enjoyed NASCAR and the NCAA basketball playoffs. Still, it wasn’t enough to compensate for the lure of the Olympics and the Super Bowl, causing the “sports event programming” share of viewing to plummet from nearly 25% to 12% in March. According to Fuhrer, dramas gave broadcast a boost, accounting for one-third of total broadcast viewing thanks to a 17% increase in viewership.