We’ve been tracking the growth of Starz as both a premium cable network and social TV trendsetter for almost two years. The network faces similar challenges that startups face when trying to grow in a world of fierce competition. They’ve proven with Boss, Spartacus and now their new drama, The White Queen that social can make a huge impact on the success of a premiere and building a brand around a show that’s about to be unleashed. We spoke with Starz Executive Director of Digital Marketing Erin Dwyer about their social TV strategy for the show.

The miniseries’ social TV strategy implemented by the network for The White Queen couldn’t be more sharp. Here’s a summary of the show to understand the context of the world the network had to create across social followed by details on the successes.

The White Queen is a riveting portrayal of one of the most dramatic and turbulent times in English history. A story of love and lust, seduction and deception, betrayal and murder, it is uniquely told through the perspective of three different, yet equally relentless women – Elizabeth Woodville, Margaret Beaufort and Anne Neville. In their quest for power, they will scheme, manipulate and seduce their way onto the English throne.

The year is 1464, before the Tudor dynasty ruled the country, and war has been ravaging throughout England over who is the rightful King. It is a bitter dispute between two sides of the same family, The House of York and The House of Lancaster.

The House of York’s young and handsome Edward IV is crowned King of England with the help of the master manipulator, Lord Warwick “The Kingmaker.” But when Edward falls in love with a beautiful Lancastrian commoner, Elizabeth Woodville, Warwick’s plan to control the throne comes crashing down.

A violent, high-stakes struggle ensues between Elizabeth, her most fierce adversary, Lancastrian Margaret Beaufort, and Anne Neville, the pawn in her father’s power game – each woman vying for the crown.

Designing a lineage guide to bring the show to life:

Unlike Game of Thrones or The Walking Dead, shows that came to TV with build in fan bases, The White Queen had to excite a fan base that might not be familiar with the story. “We created a lineage of how far the Lancasters go back to King John,” Dwyer explained, “that focuses on the show’s relationships.” As fans of Game of Thrones and other time period, complex dramas know, the story lines can get very complex. Dwyer told Lost Remote that the lineage is “extremely sticky,” and that “people are spending close to five minutes,” on The Family Tree they built.

Creating a successful Facebook strategy that translated into viewers:

“We knew we had a unique challenge since Starz and premium shows skew male” ,” Dwyer described. After implemented their strategy “over 95%,” of the show’s fans on Facebook were female. Regarding leveraging Facebook for tune in she described that there female fans really loved their “content and they turned into viewers since the majority was female as well.” Here were the results:

Over 20% of their video views from content they posted (trailers, etc) were earned, they doubled their Facebook fan base and they had over one million page engagements on Facebook alone.

Starz takes judging engagement very seriously and judges the engagement as follows. When making any kind of Facebook page comparison they make sure to normalize the metrics, taking posting frequency and audience size into account. To do this they look at total comments, likes and shares and measure that against posting frequency and audience size (per every 1,000 fans).

During The White Queen’s premiere week, then network saw a score of 80, their highest yet. That means that per post, there were 80 engagements for every 1,000 fans on The White Queen page. “We successfully worked on a paid and earned strategy,” Dwyer told Lost Remote.

Social buzz was strong enough to bleed over into search:

The White Queen premiere was also trending across search, an understated successful result of social TV success. Dwyer told Lost Remote that the buzz generated from their social TV efforts is “likely why Google searches started happening. People were seeing and hearing and started searching on Google to see what it was,” she explained. 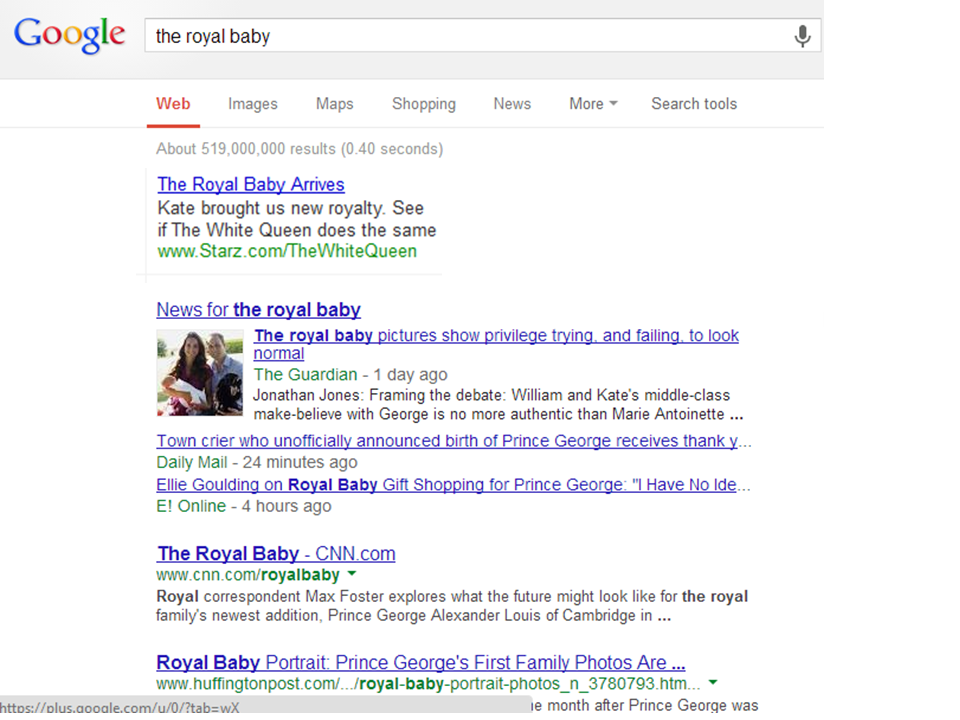 They also smartly ran a royal baby ad in the middle of the real life news to bring in fans into the world of The White Queen. Dwyer described that Google even “wrote us a note about how great,” their ad was during the royal baby hoopla.

The network described that The White Queen’s pinterest was “the first ever Pinterest board for a Starz show; took advantage of the buzz around the royal baby with a Royal Baby board as well as boards focused on the lifestyle aspects of the show such as ‘Royally Chic’ and ‘Herstory.'” They also found influential pinners and repinned their content as well as producing original pins. Dwyer also explained that they partnered with “She Knows” a very popular blog with a large Pinterest following to contributed with advice columns and “things you can learn about love from Elizabeth.”

The show also trended on GetGlue.

What every TV network can learn from Starz:

Starz proved that when you really study and understand a show’s core fan base, anything is possible. They are also highlighting an extremely important part of social TV that is often missed when endless discussing the relationship between social and ratings – search still matters a lot. The buzz they created caused fans and friends of fans to look up the show and find all the info they needed to be able to tune in. Imagine if fans could have instantly clicked to watch the show right within Google?