With a cluttered marketplace – and more than 12 professional sports teams across metro New York – Tim Kemp, Senior Director of Marketing for the New York Jets, knows it takes fewer, bolder moments to make a splash. And with the launch of an all-new identity and uniforms for the nearly 60-year-old brand, Tim and his team had a field day. Read on to hear more from this sports marketing veteran and check out the team’s new look.

Why did you choose to join the New York Jets?

As a marketer, you want to be in a culture that encourages big-ideas and creativity. The New York Jets are constantly pushing boundaries for what is considered the status quo for sports teams. Given the platform that the NFL provides and our location, my role at the Jets provides me with an incredible opportunity to make an impact that everyone will see. The Jets have such a great history and tradition, but what I’m most excited about is helping write our future.

What are you working on now that is innovative?

We recently partnered with Def Jam Recordings focusing on three main elements: music, content and gameday experience. The partnership has provided us the opportunity to produce exclusive, unique content and music surrounding the team, while also bringing fans of the Jets and hip-hop together. We were able to tap into their incredible artist roster (Logic, Nas, Pusha T, Jadakiss, to name a few) to really help seed our brand with an audience who otherwise is not following the team.

We also just launched a new brand identity to coincide with the introduction of our new uniforms. Similarly, we are going to use this platform to ensure we are hitting new audiences outside of our core followers. We think the design and storytelling behind it gives us an opportunity to create the next generation of Jets fans.

Our fans and our players have been asking for new uniforms for some time now. The last time we made a change was almost 20 years ago and this is the first time in several years an NFL team has redesigned their core identity elements. Ironically, the brand launch is happening at a time where we are seeing a lot of positive change surrounding the team. With a new head coach this season, great free agent signings, a top pick in the upcoming NFL Draft, and an unbelievable core of exciting young talent, this is coming at the perfect time to really go out and tell our story the way we want it to be heard.

How did you approach the release and promotion of the new brand and uniforms?

For us, it was about finding the most meaningful platforms that could help deliver on our objectives. Today – especially in New York – it’s nearly impossible to break through the noise. We felt it was important to focus our efforts on fewer, deeper, and bolder moments. We identified what those platforms were very early on and remained steadfast in our execution. It really helped us focus on what truly mattered to the overall success of the campaign.

For example, we worked with Nike to develop 100 limited-edition seeding kits, which were sent to a very select list of personalities we felt could help amplify our messaging. Each kit contained hand-signed letters from our Chairman & CEO, Christopher Johnson, along with customized uniforms.

We also collaborated with Jordan Brand and Jamal Adams to create three custom Air Jordan 1 low shoes, inspired by the newly unveiled uniforms. Each shoe represented a new uniform color and was made from custom football materials. This really helped us tap into an audience who otherwise would not have been vested in the campaign.

All of the efforts culminated with tonight’s exclusive launch event in New York City. We were able to get an incredible crowd to the event, including celebrities, influencers and Jets Legends – completed by our host, comedian J.B. Smoove, and musical performer Max. Live streamed across all of our digital platforms, it was an incredible moment for the organization, as we officially launched the next generation of Jets football in front of a captive audience.

Tell us about the new look.

When it comes to a brand launch, you can do as much research and planning as possible, but you truly don’t know how fans will react until it is released. As you can imagine, there were hundreds of different options and prototypes that were considered, but the final product was one that we were all were excited and proud of. 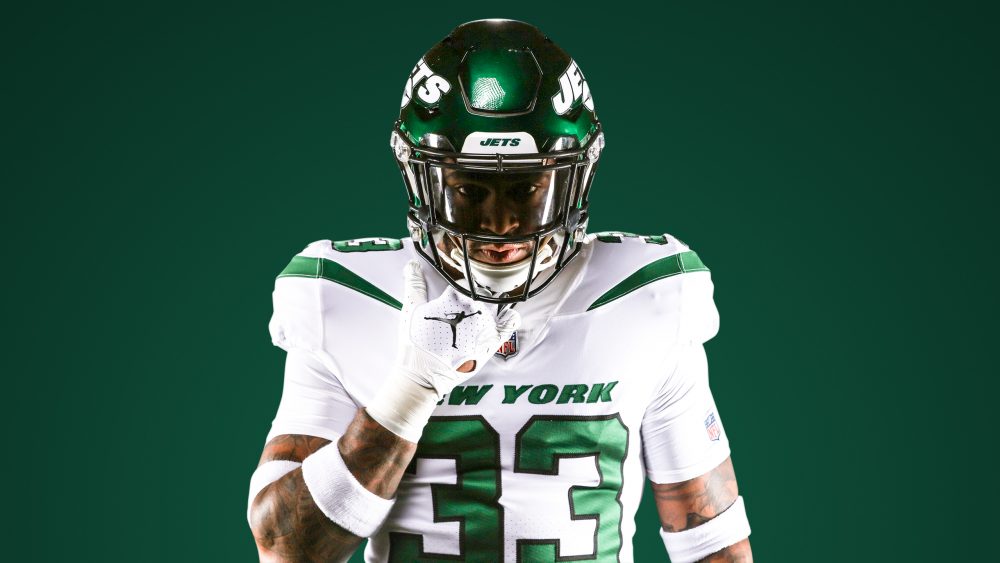 These new uniforms consist of three new colors, Gotham Green, Spotlight White, and Stealth Black. Our primary green color is a brighter, more modern green developed exclusively for the Jets. The Spotlight White jersey is an evolution of our traditional white uniform. Our newest uniform, Stealth Black, was inspired by the toughness, grit, and resiliency of New York City.

On the uniform itself, one of the biggest changes is NEW YORK, stitched across the chest. It was important for us to boldly and proudly showcase the area we represent. The shoulder pads and legs feature the foundational design element, the “Jet Edge,” which was inspired by relentless speed and movement. Lastly, we updated our primary logo, refreshing the shape, color, and the football design within the logo.

How do you pick and develop the talent on your team?

To use an old sports saying – sometimes you draft the best fit for the team, not the best available player. It’s important to find the right people that will make the team stronger, not the individual. I’m most interested in finding smart and strategic thinkers that can bring new, exciting ideas to the table that will ultimately benefit the team.

What one thing do you need from your CMO to help you be successful?

I think when you look around, the best CMO’s have a perfect balance of vision and an incredible ability to execute.  Sometimes people spend too much time creating amazing, forward-thinking ideas, but they don’t have the resources or ability to pull it off. The most impactful leaders are those that have incredible foresight and can also back it up.

What’s the best advice you’ve received that has helped you in your career?

Push the limit and never accept the status quo. One of the most fundamental elements of advancing any business is being able to innovate and create. And if you fail, make sure you learn from it and fall forward. You will learn more going through adversity than you will by avoiding it altogether.

What’s something that most people don't know about you? I have a bulldog named Cal, named after my alma mater’s former Head Coach Jim Calhoun.

If you weren’t a marketer, what would you be? I quickly realized the Shortstop of the Yankees was an unlikely goal to have. Maybe in the next life.

What book would you most recommend to fellow marketers? Shoe Dog by Phil Knight.