Body diversity is a good thing. 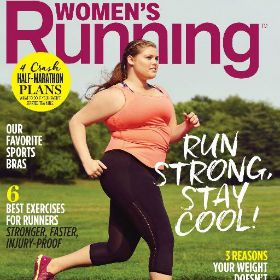 Another advancement in the body image discussion: the magazine Women’s Running has put a plus-size runner on its cover, 18-year-old Erica Schenk.

“The cover sparked a huge reaction on social media, inciting the biggest response the magazine has ever had,” says CBS News, which quoted Adweek’s very own Emma Bazilian who says it’s part of a larger trend toward acceptance.

“They can take all the publicity they can get and this is going to be really positive publicity,” Bazilian said.

Schenk was photographed for a fashion spread inside the magazine and, based on that, was added to the cover. Moreover, she’s a runner, has been since she was a kid, and continues to do so in New York’s Central Park.

Besides being a great move for Women’s Running, it should serve as a wake up call to brands that are still reluctant to include different body types in their marketing and promotions. Women’s Running isn’t the first to feature a plus-size model on its cover. Sports Illustrated did it in February. But we’ve also seen a move towards body acceptance growing on social media, from the #Thighreading hashtag on Twitter and Instagram to the #Fatkini hashtag that features women who may not have worn a bikini before proudly rocking a two-piece.

When marketers are casting their campaigns, they should be casting a wider net to truly reflect the wide world of consumers.

But compare that to the response to this Bugaboo photo of a 23-year-old model running in a bikini behind her baby’s buggy. Caption:

The response was fast and furious with many mothers saying that it’s unrealistic, both in the female body that it shows and the activity she’s participating in. But she did have her defenders as well, those who said folks should stop being haters and the photo is well suited for the target they’re trying to reach-a mom who’s an avid runner who will buy an $800 stroller. Again, our Adweek colleagues chimed in:

So, it comes down to deciding which makes your brand happier: a plethora of negative attention, or a smattering of positive. Because people pay a lot less attention when you give them an ordinary, realistic depiction of anything.

Of course, these sorts of images are so everyday, it can be hard to even muster a frustrated comment. And when you see yet another difficult-to-obtain image, maybe the only thing you can do is laugh. Which is probably why the comments with the most likes are the jokes, including the highest-ranking one: “I prefer running naked with my children.”

The broader discussion about accepting various body images means that consumers want to come to terms with thin bodies as well as not-so-thin ones. Passions are running high for a more honest depiction of women in ads and across media. Still, that doesn’t mean you have to shun models altogether.

The key is being (and I don’t like using an overused word) authentic. There are times when some body diversity is warranted. There are other times when a model makes the point. Being open-minded about representing your brand in the way that makes the most sense is the most important thing.